"Of course, they're all raving mad, you know!". 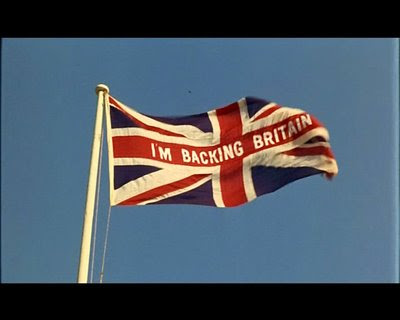 Some people have been looking for patriotic ways to go forth and multiply their credit card payments in order to help the UK through the recession. Among others Blue Eyes wants to know what Britain makes and Hatfield Girl is disappointed by a trip to London's West End.

This desire to back Britain is not new. Forty years ago 1968 the "I'm Backing Britain" campaign got going. Five secretaries volunteered to work an extra half an hour each day without pay in order to boost productivity, and urged others to do the same. Prime Minister Harold Wilson was delighted to seize the opportunity to endorse the campaign. Harold was an even better spinner than Gordon, and had that same feel for a popular story and the public mood as Tony. He needed a boost as the British economy was in difficulties. Despite tax increases announced in July 1966, the 1967 budget had seen the greatest deficit in post-war history of £1,000m.{2008 excluded} The government famously had to devalue the pound from $2.80 to $2.40. The only good news was the "opportunity" to increase exports.

Robert Maxwell waded in with his "Buy British" campaign and a very brief jingoistic period of late 20th century British Union Jack flag waving history began. Just a few weeks ago The Archbishop of York called on the Government to lead a campaign to encourage shoppers to buy British food

It is worth a quick read to see how these well meaning and well intentioned campaigns turned out.It was always going to be tough even with the advantages of limited globalisation and a stronger British manufacturing base. Calls on the public spirit couldn't hide the economic realities.. The best example being the thousands of T/Shirts with the "I'm Backing Britain" slogan, that had actually been manufactured in Portugal.. The marketing director explained that "we just cannot find a British T-shirt which will give us the same quality at a price which will compare"

At the conclusion of the film Carry on up the Khyber which opened in November 1968, the raising of a Union Flag with the "I'm Backing Britain" slogan is greeted by the evangelist Brother Belcher, fresh from his dinner under shellfire with His Excellency Sir Sidney Ruff-Diamond, turning to camera and saying..

"Of course, they're all raving mad, you know!"
Posted by Bill Quango MP

And we're STILL carrying on up the Khyber today!

The only lasting thing to come out of that period in our history is the saying: This **** of a PM needs a good kick up the Khyber.

Very shortly those left in this septic Isle will be the boiled frogs.

Come back, my beautiful warriors, there is nothing to be afraid of !

Thank goodness for the idiotic Backing Britain campaign, without it we'd have never heard "Back in the USSR".

I'm backing out of the U.K. slowly.

the song, "I'm backing Britain" was written & performed by one ... Bruce Forsyth

it was dreadful; can't have done his career any good, wonder what happened to him

the Beatles one was indeed better, James

I don't doubt that the UK has hidden manufacturing. Analysing the amount of stuff produced by a country kinda misses the point.

It all has to be measured in terms of the size of our population.

A graph from Alice Cook (below) shows clearly that employment in manufacturing has been in steep decline whilst jobs in the financial services sector has been increasing (until recently).

Ah ! - you may say - automisation reduces the number of jobs required in order to generate the same output (applies to both sectors, actually.) So all is well.

This is not the point.

The real issue we need to be concerned with is how out of kilter our population levels are in terms of their relevance to our economic productivity.

It's all about ballance and I don't think we have it.

I was shocked to hear that britain is the 6th biggest exporter of manufactured goods.

Apart from Aero engines, I cannot think of anything we make.