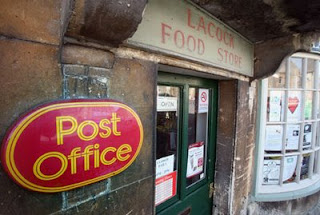 Post Office have retained the benefits card and will surely cheer the 4.5 million users of the account. It will also cheer MPs who have been receiving around a 1000 letters each demanding that the POCA card stay where it is. As recently as this Monday 99% of people in the know expected the card to go to a rival bidder.
Quite why it didn't will probably remain shrouded in mist until a FOI can be obtained, but Mr Mandelson seems heavily involved. Who leaked the leaked letter I wonder?

The tender process {which Ireland simply said was unnecessary,went to the high court in the EU and then won their case} has been abandoned. Is this to do with compensation as no 'winner' was announced?

Anyway,the government has finally and after much much dithering done the right thing for small business, the rural economies and their own election prospects. Pitching some 5 million angry pensioners, and a further unknown quantity of outraged voters into the enemies camp is no way to prepare for election.

Expect the vote losing vehicle excise duty increase, announced last budget, to be U-Turned in the very near future too.
Posted by Bill Quango MP

Seems we need general elections every 18 months to keep incumbents in touch with reality.

This is good news MR BQ.
I am patiently expecting more from you soon....

U-turns? More like the infamous Magic Roundabout, if you ask me.

Anon: totally!
Cu:good you are back from holidays..dollars go far?
dennis: I have driven round that thing a few times. You go round and round for a bit, suddenly decide to change direction, consult a map, find yourself reversing direction on the original roundabout but with a changed course and then blindly take another of the many exit options, any of which will take you a little further from your intended destination.
If they put toll gates on it and a congestion charge it will be a perfect metaphor for New Labour.

Not to change the subject but cash machines run by RBS and HBOS are all on a reduced maintenance cycle.. this means they no longer work...nationalisation has deprived some communities from access to their accounts.

Bill, that roundabout complex has often caused motorists to exit Hemel Hempstead in random directions. I used to live not far away and it was a local sport to sit and watch the terror it engendered in newcomers. An apt gateway to a socialist paradise (part of the 1945 govt's gerrymandering "New Towns" exercise).

Don't get me started on the NHS hospital there ...

Mutley- I have noticed that in my local area. seems they don't want to give the money out to the proles anymore!