No government target for the pound 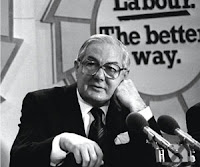 "Sunny Jim" Callaghan must be spinning in his armchair. After a long struggle with Harold Wilson, who refused to even discuss the matter, Callaghan was forced to devalue the pound in November 1967. The devaluation of the pound ended his time as Chancellor of the Exchequer. He went on to make matters worse elsewhere, especially in Northern Ireland and with the Trades Union reforms that never materialised. And he had to get the IMF to bail out the country too. Forced to hold an election after losing a vote of no confidence in his Premiership in 1978, he lost heavily to Margaret Thatcher.

So poor old Jim must be fuming that the sterling crisis that began his ruin has become such a non story. His cut of around 14% forced him from his office. Today the pound is already below the Euro {£0.99} at any bureau de change, and has lost around 25% of value, yet it seems few seem to mind. Least of all the government who don't even acknowledge that the weakness of sterling is in any way a bad thing.

Yvette Cooper said "We've never had a policy of targeting the pound. Our policy is to target inflation. And that I think has been the right one." David Cameron agreed.

No doubt the strategy is a bit Fawlty Towers, "Don't mention the Euro." Then options remain open, unlike 'Big Jim' who had promised no devaluation. Defending the currency would be near impossible anyway.
What other options there are is unclear. What could happen when the next interest rate cut is announced?

This is the sale advert of a major furniture retailer in the newspaper. It is 1/4 page on the front and a full colour, full page, on the back.


Massive Savings
beat the $ price rise
As well as our legendary claim to be "the best prices in the UK" by forward buying certain ranges, for a short while, we can "beat the significant rise" following the currency fluctuations.
BUT ONLY WHILE STOCKS LAST!

Whatever the wisdom of this sales campaign I have never seen a January sale advert that says "buy it now because it will be more expensive later."

We will all see much more of this sort of thing in the new year.
Will a public, who are enjoying a level of price cuts not seen for years, be tempted into the spending our way out of debt policy, when prices not only revert to their pre-sale levels, but actually increase?

As James Callaghan himself said
""We used to think that you could spend your way out of a recession, and increase employment by cutting taxes and boosting Government spending. I tell you in all candour that that option no longer exists"

Is he still alive?
let's ask him what to do.

I could be wrong, but I think Sunny Jim passed away in 2005.

GBP has lost 25% of its value against what since when?

How long do you think prices on things like LCDs will keep falling?

In your example its even worse. Even down against the mighty Israel Shekel from 7.25 Jan to 5.58 today.
Point is .. no one cares.

In fact I doubt retailers will restock. Just employ spacing techniques and run with lower stock levels. Why buy in at inflated prices when the stuff isn't likely to sell anyway?
Fashion chains would have bought for spring on a dollar high of £2.10 so lots of stuff coming, maybe even taking advantage of cheaper shipping rates now. Summer was poor in 07 and 08 so put that unsold stock out early and wing it until April/ May / June to see if the $ fall has occurred.

It will help our exporters.

Bullshit. £ has merely retraced its steps back to $1.50 = £1 as it has been for most of my working life. Don't remember things suddenly becoming very cheap when £ was high so it is no surprise that they have become no more expensive now £ is low. Commodity prices falling faster than currency anyway. Brits are the only people that have been buying anything anyway, so foreign suppliers are now cutting prices to stay in our market. Brit exporters rubbing their hands with glee (yes, even the Jap ones..)

you are wrong about things being cheap when the £ was high. they were.
there has been virtually zero inflation in clothing in at least 10 years..that is until this year.
there was a post on it a while back.
Cheap toys, cheap white and black goods, cheap furniture..?

IF {and i grant it may not happen} the dollar were to stay at its current level vs the £ there would be an increase every sector that imports unless they are very large institutions who have hedged the currency.

I've already had the suppliers in.
Selling on stored stock from 2008. Once their inventories are dry the prices will rise. They know it and we know it. Its not a selling scam. You cannot swallow a 25% increase unless you are very very lean or making an awful lot of profit. Most UK retailers are neither.