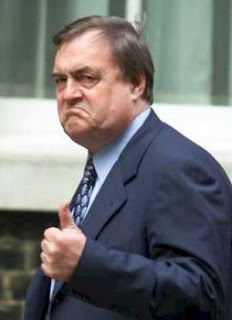 John Prescott has been re running the Labour top 50 achievements on his blog. I vaguely remembered it, but its suddenly popping up all over the place. Iain Dale did a link for him too. So, lets have a look at New Labour's claim to fame.

Its a long job, so well break it into bitesize chunks.

1. Longest period of sustained low inflation since the 60s

{If you manipulate the figures,use CPI instead of RPI etc.. Plus the emergence of the Asian markets that kept prices low for a decade didn't hurt either. Low energy prices too. Hard to credit the Blair/Brown team with this so..No credit}

{Oh dear.. look out the window, see where its led us. You might as well say "enjoyed an unsustainable housing boom" Score zip}

3. Introduced the National Minimum Wage and raised it to £5.35

{Good for some but not the great leap forward that is claimed. The success is at cost in employment, somewhat masked by the switch to more part time hours. Not enough space here to explain that a NATIONAL minimum wage completely ignored areas of high and low employment, relative costs of living in different parts of the country,the effect on small businesses of a constantly rising wages regardless of trading conditions etc. It is fair to say that minimum wage benefited Labour areas more than Tory ones. Nil point}

{record numbers sure..but not on the street. The target led policing policies has done much to undermine law and order in the country. Zero pints, possibly even a minus point}

{ But only selectively. Serious crime has risen. Violence has risen. Knife crime has risen, Drunkenness has risen.Shoplifting isn't even seriously measured . Car crime and burglary are well down. Any link to the cheap Chinese DVD player being worth £15.00 new in a box, where the Tories VHS was several hundred pounds? Ditto car manufacturers anti theft and secure audio systems? Crime is one of the areas where this government is viewed as at its weakest. Nought points}

6. Record levels of literacy and numeracy in schools

{you cannot be serious? Up to a third of 11 year-olds cannot read, write and add up properly when they leave Junior school.. Education is going to be the biggest failure of Labour's tax and throw era. Zero points}

{ unsure how they are measured and against what, but generally people are satisfied with primary schools as learning centers and daycare facilities. and that is the real measure. Chalk up a success.What children have learnt at school is very variable. But at least a genuine effort was made to improve primary schools. Call it a credit}

8. Funding for every pupil in England to double by 2008

{Funding is an achievement? There have to be results surely? If its just employment creating then pay people to stay home. Funded by what to achieve what? Nearly 23,000 children left school without a single GCSE. Careful John, moving into PFI territory here too. Nothing given}

9. Employment went to its highest level ever.

{Long term unemployed {5 years +..which is a hell of a long term definintion} only rose. Twenty times up from 1997 . 2.7 million on a conservative estimate claiming disabilty + the 1 miilion on job seekers etc.. Ten years of relatively good economic growth should have helped to reduce the state's bill's. Instead worker's were imported to fill the positions. And the unemployment figures for 3rd quarter 2009 will rival anything the Tories managed. No joy.}

10. Written off up to 100 per cent of debt owed by poorest countries

{Good news for them. We still lend to them though? So ..? Will we have to write it off again? UK government debt, before the credit crunch was high. National Debt as a % of GDP has increased from 30% in 2002 to 37 % in 2007. This was despite the long period of economic expansion. It is primarily due to the governments decision to increase spending on health and education. There has also been a marked rise in social security spending.. With the recession it will be astronomical.}

How are they doing so far? Getting your vote?

Never voted for them in my life and never will.

Fifty achievements. Is that the same sort of Fifty as a Clegg 30 or a Hague 11.

I voted for them once when I was an 18yr old student & I'd had my fill of Thatcher. What a dreary little conformist I must have been.

Does he really write it himself though?

The giveway is that isn't in sentences that last for a whole paragraph.

I thought he'd be doing a 'top fifty puddings' or something like.

I think they do deserve credit for the minimum wage. I was very much against it, but it does seem to have been generally speaking a good thing.

It's a shame that labour feel they know how to spend our money better than we do, if they didn't have their awful redistribution agenda then the minimum wage might have had a much better effect.

Ken:maybe the next 10 will convince you

SW: I never did, but I was saying "anyone But Major"

Crushed. " The top 50 list comes from some Labour MP. It may have been drawn up for the 2005 election.
Google Labour top 50 and it appears on Town Hall web sites/MP pages/ magazine and news articles. Recently its been floating around again to reassure those who are drifting away.
To me it doesn't appear nearly polished enough to be an original "Campbell" product. I feel his team would have cut the number down to get rid of some the very weak claims, and would appear much stronger as a result.
This looks more like an MP responding on Question Time or suchlike, to a charge of "What did New Labour ever do for us?"
"what did we ever do? lots.."
"Name one thing you warmongering taxers.."
"One! I'll give you 50"

and some intern had to sit with the MP and come up with them..
"Social Engineering Equality? Poverty? Roads? The Aqueduct?

JPT: I wonder if you could up with the top 5 allowable puddings under new H+S and healthy eating, ethically sourced,multi-cultural, diversity friendly, politically correct puds.
"Winterval pudding?"

In other words, what the minimum market rate was. There would be roughly 10 employed per store.
Today, there would be a maximum of 4..except in the busiest where it would still be 10.
Minimum wage is not a bad thing, but its inflexible, and expensive, treats a more knowledgeable full timer the same as a college 1 dayer.
In the example I give it was almost impossible to recruit in Crawley or Staines or Dudley Or Manchester where airports and associated trades, full employment meant a much higher wage was needed to attract staff.In Littlehampton or Blackpool,Bridgewater it was never a problem.

Bill Q, doesn't Major's period in office look like a golden age in comparison with the present?

on 5 (crime) there is the shocking development (enacted 2007) whereby only banks can report banking / credit-card fraud etc, not the humble victim

and of course the banks don't, they just repay the victim and keep shtumm, it's usually an inside job anyway, keeps the numbers down & very convenient for all concerned