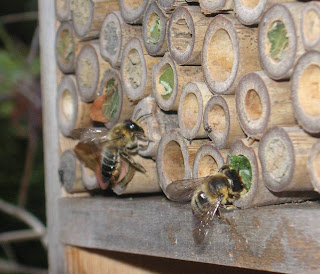 These fine creatures are Leaf-Cutter bees, hard at work in the Drew garden this weekend.

They are clearly Capitalists:

- industrious
- vital for the natural economy
- keen on private property
- each has its own home, but gets on fine with the neighbours (see photo)
- co-exist happily with other capitalists, viz the Drew family, and the Mason bees (the ones whose front doors are grey paste rather than leaves)
- will sting, but only when severely provoked

At present they take a dim view of home ownership, echoing Alice Cook's opinion, and accordingly prefer to rent from me. They are excellent tenants.

They look cool! They OK with dogs?

yes, and kids - and people with intrusive cameras ...

they only sting if actually prodded

(it's apparently because they don't have any honey to defend)

and they are great for pollenating, which is important given the hard time that honey-bees are having

I'd also add that Ants, too, are therefore the ultimate communists: they all live together, their might is military and uniform, and they are expendable when it comes to protecting their Queen. Oh, and they eat each other too....

i think you will find that there is only one capitalist living off the fruits of all the workers' efforts!

Or should I say self employed.

you are, of course, correct Lil, and TBs (who is too lazy to check the carefully-researched links!) is Wrong

not for the first time, TBs - do keep up at the back

Merms ! how the devil are you ? it must be nearly 2 years

did you make the nest-thing yourself, or buy it?
How do you attract them - do you just put a suitable structure there, and hope for them to find it?

- bought it
- stuck it where the instructions said: "in dappled sunlight"
- waited (for several weeks)
- suddenly, one day, it was attracting a load of attention !

2008 was its first year of ops: this year of 50 tubes, 14 have been occupied by Mason bees (a bit earlier in the year), 12 by Leaf-cutters (who are still active, there may be more in the coming days). The literature says that a single bee may set up camp in more than one tube

none of the busy chappies seem to object to close observation !

I stand corrected - good to see that bees can evolve to higher forms of organisation just like humans. Fail to see how leaf cutters can be described as capitalists when they have no capital otehr than their own.

Would be inetresting to know if leaf cutters have evolved from normal bees or is it the other way around?