There is one good thing in Miliband’s programme, and it’s not new: Smart Metering. The more we know about the micro-details of energy usage, the greater the opportunities for smarter actions, of all kinds. Smart Metering will be one of the reasons why the reductions sought from homes, offices, shops and factories will, as we said yesterday, be feasible if not actually modest.

But when we read about using electricity (instead of gas) for space-heating; when we hear that Miliband has decided to go easy on the aviation industry because, you know, it’s every worker’s right to travel RyanAir for free; when he implies that (as the Grauniad puts it, in an editorial aptly entitled 'Green Dreams') it can all “be achieved without depriving people of the comforts of their present, carbon-intensive lives” - we know we’re in Wonderland.

And here’s another big flaw: there is no mention of the UK’s burgeoning population. Since we don’t know to within 5 million what it actually is today, and since Alan Johnson doesn’t much care what it’s going to be in future, how can little Miliband (or indeed any other Minister) plan intelligently ?

This may seem a minor point, but it leads to a bigger one: get a look at this (also from Miliband’s masterwork). 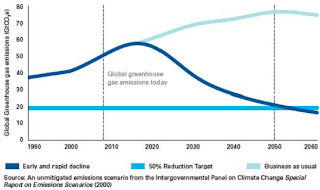 Global emissions are in any event predicted to peak in mid-century. This is because the global human population is predicted to peak then, too – it’s a demographic thing. This, at very least, gives serious pause for thought. In the interim, would several decades of serious amelioration / adaptation be a practical alternative to a very, indeed prohibitively, costly mitigation programme ? I’ve no idea, but I doubt it’s been seriously considered.

It needs to be, because Miliband’s strategy is a reductio ad absurdum. Assuming it's the Tories who will be handling the mess, they had better be working up Plan B.

What happens to stop the population growth at the middle of the centuary?

Is it a case of "well we're bound to have had a big war or epidemic by then, surely?"

We need smart meters to enable rationing of the electrical supply. Which is why they will be implemented, not some nice fuzzy notion about making people more informed.

Before any real change can be implemented people need to understand the severity of the problems we will be facing in a few short years time. (And the UK is in a uniquely bad situation).

Is Miliband the Madeleine Bassett of the government? And does that make Brown the Roderick Spode?

Anon - it's declining fecundity-rate, which follows 2 generations after economic growth as night follows day (by 2050 only parts of Africa will still have third-world economies and birth-rates)

this is wot I am told, by people who seem to know

Fred - not with you on smart meters: it is amazing how they change behaviours, quite spontaneously - both at the residential level and corporately

I can hardly disagree on needing to understand the problems, though !

Demetrius - well we know all about the Brownshorts ...

Environmentalism is socialism by another name.

The politics of envy all over again.

Smart meters are going to be fun. Because they have software that is reported to be easily hacked I predict there will be chaos when some script kiddy gets into one.

it's declining fecundity-rate, which follows 2 generations after economic growth as night follows day

It follows increased wealth not economic growth, so the prediction will only come true if everybody in the world miraculously becomes wealthy and well educated by 2050.

Afraid I'm with Malthus on this one.

Smart metering- like other info, will be used for more dodges.

Aye, he's a smart cookie that Millipede, introducing smart-metering. Sharp as a razor.

Of course its actually part of a European directive (April 2009) with a European standard called M-Bus (EN1357) to go with it.

So basically he's typically dressing up an EU law as if it was a great British idea invented by his good self. Probavbly he hopes the Daily Mail won't pick up on it.