Her Majesty May Not Have a Lot to Say ... 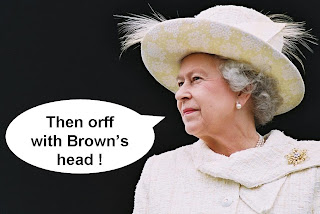 ... but she's a pretty nice girl, and she does ask cracking questions - like, why did no-one forsee the recession in detail ?

So the British Academy have had a crack at the answer. In amongst the courteous waffle it is pleasing to note they finger the pressure for lax regulation (prop. G Brown) - which is not quite a reason why no-one forsaw how it would all end, but it deserves being said again and again.

The Grauniad has posed the same question to its readership, offering them 3 sentences to complete the task. I'd give a small prize to jimbob1, whose third sentence (which again doesn't technically do the business) is:

"politically influencing, via the FSA's light touch regime, banks to extend 125%, no deposit, 7 x income mortgages to people who could not afford them".

Anyone here got better (succinct) answers than jimbob or the Academicians ?

Because people believe what they want to believe?

Because everyone was too busy buying houses, selling mortgages securitising debt, ticking boxes and trying to be popular to see it coming?

Because everyone presumed someone else knew what they were doing?

Because the newspapers didn't tell them it was coming until it was too late?

Winning elections is more important than a stable economy.

Or, on the same theme:

This populuation of idiots who believed it all and kept on borrowing.

These are two separate issues, aren't they? Why we are in the mess and why no one foresaw it? I think a lot of us understand the former and am not sure the mess was not forecast (albeit to a greater or lesser extent). Having broked some good years of my life through the Japanese boom and bust, I have always been on the cave for repeat scenarios. Of course history does not repeat itself exactly, but we can learn some lessons. For example, having been raised in the 70s, once New Labour got into power I was waiting for the sky to fall in. And I admit it was a long wait. So whilst I initially approved of giving BofE independence, I had my doubts about its of regulatory powers; loose monetary policy and whether CPI or RPI was the right metric worried me. (Do you recall all those news reports in the 80s focussing on the various measures of M£, 4, 5 etc? Not a squeak in the Brown years.) When Greenspan mentioned irrational exuberance I thought, peace at last. No such luck. Many people are now suffering because self-serving bankers and politicians promoted a bogus new paradigm. Those who cried nay were ignored as the bubble continued to grow. Now, almost inevitably, it has burst. The speculators have made their money and the poor taxpayer (by which I mean those at the bottom and in the middle) will pick up the bill.

I notice that the question Queenie was asking could be parapohrased into "who is to blame?".

The letter might have addressed this. Instead we have the rather incongruous statement in the middle of the letter:

"The
Bank of England Monetary Policy Committee had helped to deliver an unprecedented period of
low and stable inflation in line with its mandate."

Apart from the fact that low inflation cannot be caused by low interest rates, the letter generally refuses to countenance that perhaps the Bank of England's MPC and CPI measure of inflation may have helped to hide the soaring costs of housing and therefore preclude action to slow it.

Then we see the cause for the turning of the blind eye - the forum is chaired by none other than Professor Tim Besley, FBA, London School of Economics; Bank of England Monetary Policy
Committee.

Ask the right question of the wrong people and you'll always get the wrong answer.

Because Brown kidded himself that he had ended boom and bust and remains to this day in his own little dream world.

a) A lot of people did foresee it (even if you don't know much about banking, every sensible person must know that rapid rises in house prices are the symptoms of a credit bubble, which always bursts).

b) What The Great Simpleton says.

Perhaps the situation that;

Queenie fails to grasp the realities faced by her 'loyal subjects', lives off the 'state' for free and when all was rosy did not give the proverbial flying hoohaa about how all this 'growth' was being accomplished should tell her why 'no-one' saw it coming.

She is the same as the rest of em.

(except, its not the case that no-one saw it coming, its just that the establishment and all who sail in her refused to be realistic - this coupled with unfathomable stupidity and greed regards how we elect to live (Tragedy of the Commons? what? eh?))

Encourage a culture of external locus of control and see where it gets ya!

It was a bubble and in a bubble most people can't see the downside.

Brown and Nu Labour encouraged a 'debt is cool and worrying about paying it off is uncool' attitude, in government and personal finance.

Some people did warn it had to end, but it's hard to call when a bubble will pop and they were lone voices spoiling the fun.

Self-certified mortgages and second mortgages to buy extravagant cars. Young people encouraged to go to university to get useless degrees and be saddled with £20 grand debts to start adult life. Banks screaming at people to borrow more. Brown's ridiculous claim to have done away with boom and bust with his squanderlust, PFI deals and treatment of private pension provision.

Brown was in a position where he could have restrained this. There isn't a single culprit, but Brown has to carry a significant share of the blame.

like, why did no-one forsee the recession in detail ?

But they did see it, but also expected a gentle slow down back to normality, with ever decreasing house price rises.

Standing on the cliff ledge it seemed possible to climb back down from the dizzy heights using the same ropes and guides. It all looked possible, although we had climbed a bit too high. Then the cliff edge fell off.

Oh aye? Back in 2003 I was on record, and early in 2007 drawing on stuff from previous years. The information and commentators were about then for me to study. But I was one of a small and unimportant minority who thought they were more right than wrong. See http://thecynicaltendency.blogspot.com/2009_04_01_archive.html

Wow. Thanks for some great comments & welcome to the newbies.

Round these parts we know full well that many did indeed see it coming: congrats to anyone who not only saw it but acted too

no surprises that my favourite one-liner from the comments thus far is cosmic's - there isn't a single culprit, but Brown has to carry a significant share of the blame

Still blaming the consumer end of the market for this issue ? So it's nothing to do with the 50 TRILLION of valueless "derivatives" that are sitting on the books of most banks around the world then ? These worthless pieces of paper have been created and sold, often many times over, with no access to the underlying asset value, with each transaction skimming off massive comissions for the fraudsters. New Jersy has recently identified this issue when it rejected Deutsche Bank's attempts to foreclose on some mortgages using these dud papers. The court ruled that because Deutsche Bank was not in posession of the original contracts (between the lender and borrower) and that the original borrower was not a party to the subsequent re-sale of these contracts to other parties, then Deutsche Bank has no claim against the borrower.
Nobody seen it coming ?!! It's been forecast by many for more than 18 months (see worldreports.org for just one source) This is only one of many organisations that have been prdicting this collapse.
It is criminal, deceptive and illegal it is a massive ponzi scheme operated by the USA banking system.

I thought this thing started with the expansion of the Community Finance Act in the US. Kinda nice that the gubmint should help poor folks buy homes, or to look at it another way, twist banks' arms to lend to people they wouldn't lend to if they had any choice.

These dodgy debts were packaged up in obscure packages and sold on by the US banks. I'm sure City Whiz Kids concocted the investment vehicles and Credit Default Swaps to 'insure' them.

This created a property bubble in the US which fed the trading in these dodgy instruments. We had Icelandic chancers appearing from nowhere to have huge sums shovelled at them to buy major companies, all sorts of things which were nonsensical.

There was definitely a consumer borrowing aspect to this mess, encouraged by people who should have known better.

It's a bit too easy to blame Brown for it all, when it's a multinational problem, but there's no doubt the UK would be in less of a mess without his recklessness.

The little people running up unwise debts are just another part of the story.

It was a Blair / Brown fraud your Majesty

I knew the housing bubble would burst, and based my taking out a 2 year fixed rate mortgage on the assumption that it would go up even higher then burst and the gvt would lower interest rates a lot.

I was correct, except the boom went on even longer than I thought it would. I also didn't know about the madness in the banks which made it all even worse.

There's only one cause and it's called "Basel2"

It changed regulation from governments deciding how much credit is created and then banks allocating it to a system whereby banks could create credit without restraint.