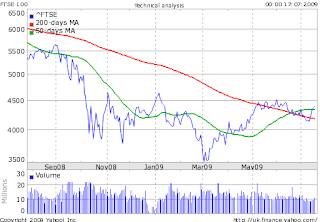 The strategy of sell in May and go away is a city lore that comes true more often that not. Whilst the summer silly season lasts it is hard to see the markets move on low volumes. Just at the minute though, a renewed rally is taking shape. The FTSE was up all last week and the index is up again today, over 4500 to its highest level of the year.
To date that would have been the right as per usual, the FTSE drifting from 4414 down to near 400 over the summer; but since last week things have changed. There is definitely a change in sentiment, even the dreadful business that is CIT has been handed a lifeline today.
The FTSE is now back up over its May high and heading North. With all the positive vibe, this rally may well last into August. The index is currently over its 50 and 200 day moving average if it closes at this level today then there will be a sustained rally.
Moreover Lloyds bank has been buoyed by the news George Osborne may not break it up. How much of a signal is that the government is finished, when comments by an opposition politician move a share price by 5%+!
Posted by CityUnslicker

It is probably just the cricket result.

of course they wont break up Lloyds-HBOS.

Yeah, my positions have recovered a little bit. I still wish I'd dumped them though and got back into Man Group when I was eyeing it up at 237p the other day. I'd be back to where I had started now.

You reckons these banks have sorted out the stinky stuff on their balance sheets yet or you reckon it's still there, being periodically sprayed with perfume?

Steven L - oh it is still there and will be for years. bank shares are very high risk investments still.