What Did the Olympics Ever Do For Them ?

Never mind the much-debated ‘Olympic Legacy’: in the middle of Gordon Brown’s recession, what about the here and now ? Real help for real people ? British jobs for British workers ? Here’s the official story:

"Up to 30,000 construction jobs will have been created on the Olympic site in east London by 2012, according to the Olympic Delivery Authority. The workforce on the Olympic park and Olympic village is expected to rise to 11,000 later this year, from the present level of 3,315. • 23% are local residents • 57% are from London • 9% were previously unemployed before finding work helping deliver the Games and 51% of these workers live locally"

The ONS offers all manner of statistics shown by local authority. So how about the impact of the Olympics on job prospects in the benighted boroughs of Newham (where most of the facilities are being built) and neighbouring Tower Hamlets ? 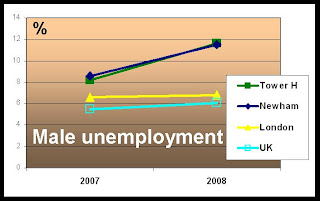 Here are the unemployment data for the period 2007 - 2008, when the recession had yet to bite deeply but Olympic construction was taking off. Neither the UK overall, nor London as a whole, saw very much increase. But the two boroughs in question, both in a worse position at the start of the period, saw significant increases in unemployment.

The off-hand response is obvious enough – if you want a job done properly, get a Pole. But seriously, how can HMG square this with its rhetoric ?

Footnote: for completeness it should be noted that over the same period unemployment fell significantly in Hackney, and remained flat in Barking & Dagenham. What local factors am I missing ? Am I reading these numbers correctly ? Or are they all just fictitious ? What is going on here ?

"The workforce on the Olympic park and Olympic village is expected to rise to 11,000 later this year, from the present level of 3,315. • 23% are local residents • 57% are from London • 9% were previously unemployed before finding work helping deliver the Games and 51% of these workers live locally"

You have to read these things like a document put together by a devious lawyer, or the statements of the March Hare in Alice in Wonderland. They are not false statements, but neither are they true in the way you might assume. For instance, what exactly does "live locally" mean? What does "from London" mean?

Would you expect a large construction project to take place and most of the workforce to come 50 miles to work each day, or would you expect them to put up in portacabins, caravans etc, where they might be said to be living? This living would be local.

I must admit to being jaundiced about the Olympics, seeing it as a vanity project wasting billions at exactly the time we don't have billions to waste. I doubt that the incidental advantages will be anything in comparison to the expense.

The other assumption we are invited to make is that when the figure rises to 11,000, the proportions of local residents etc, will remain the same.

"9% were previously unemployed before finding work helping deliver the Games"

What ? You mean downhill skiing comes in a box ?

Canary Wharf was also offered as the magic solution to find jobs for these local people, and to a limited extent it has; they're the cleaners and the burger flippers. The folk in the offices upstairs on the decent wages all come from elsewhere.

It's quite obvious that EU citizens will want to apply for some of these jobs, given the speed at which recruitment will take place, so 'Olympic jobs for British workers' looks pretty unlikely.

Two construction firms, in the local area that I know of have had no work from the project.They applied many times They are within 5 miles. Currently surviving on doing up school bathrooms, while all their heavy plant sits idle.

You only have to be on the A2 at 6.00am to experience the white van rush from the south...

Just the same when the Dome was pouring money into Nulab's vanity.

cosmic - agreed, the weasels are many

And what pray happens to all these workers in September 2012? What we will have is a large number of buildings etc. that will have high maintenance costs, plus ongoing liabilities. If we are lucky there may be a handful of medals to wave about, at possibly the cost of a billion quid each.