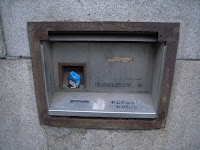 Long before Cityunslicker was writing this blog, Gordon Brown was showing his ineptitude in interfering with Capitalist markets.
The prime example of this is the gold sale, where he pre-announced the UK gold sale to the market, caused a huge dip and promptly sold into it. Now on the TV you often here Labour spinners saying we bought euro's so it was not such a bad thing as the euro has appreciated nearly 30%. Well, gold is up 500%, 30% does not even keep up with inflation over 10 years.

Now over the weekend Alistair Darling has been flagging that he intends to play with the UK retail banking market to create more banks. Up to 3 new ones will hit the high street to try and make amends for the failures in the building societies and banks during the credit crunch.

Nothing wrong with this, I am all in favour of the mega-banks being cut down to size. However, you do not pre-announce such sales to the market. it is just stupid as you lower the price of the assets. Moreover, during a credit crunch, which seems to happen about twice per century, is the worst time to be selling bank assets. Talk about picking the bottom of the market.

The real issue is splitting investment and retail banking up to de-risk the banks. Also to provide more competition in in Corporate lending where companies are struggling to raise funds.

So in summary, the Government has manged to get the timing and target of its initiatives wrong again.

they want to set up 3 new banks? all of which will eventually be gobbled up into foreign ownership no doubt

So if they want to set up 3 new banks for competition, why did McNutter force through the car crash that is the Lloyds/HBOS merger?

Mr Drew I agree with you whole heartedly, separate the investment from the commercial banking sector and make sure a commercial bank can not be taken over by an investment bank and visa versa. Unfortunately, some "clever" whizzkid will try to do so and con the gulible government of what ever hue, that it is in the countries interest, and there are directorships in the offing.

roym - I stopped playing bank shares a bit early in the rally as I could see the downsides, with hindsight the right thing to do. Although made a bit day trading lloyds last week.

RBS could go to 0 if the projections go wrong; easily can end up in 100% state ownership.

Anthony - quite. Long term policy is not really the current Government strong point - everything is focused on results before june 2010

Anon - well Adair Turner said no this morning and he is Darling's stooge.

do they really want to nationalise the thing?
im confused as to the troubled asset business as well. they wont be paying 17bn to joing but will take the hit on the FIRST(!!) 60bn instead? why have we not yet been told how much rbs is on the hook for? i suppose some are still waiting for it to blow over? sigh

Looks like another load of bailout cash being given away tomorrow.£26 billion?

I thought about all this banking crisis,bad footing on derivatives, dodgy loans (negative equities when granted), how many of the banks had directors who had cross directorships or straight from one to another, I can think of one.

Does this mean they've spent the last wedge we gave them?

This reminds me of one of these dodgy Spanish lottery cons, or a 419 scam, where the crook keeps coming back for more and more.

I reckon this could go on for a few years if we keep stumping up the readies.

Will Brown have a job in the City once all of this is over?

One reasonably fair way of doing it would be to give the banks to taxpayers for free (let's say, £1 worth of shares for every £100 income tax you pay, or whatever).

Alternatively, if you genuinely think he's selling them at undervalue, why don't you just go out and buy as much as you can?