We said the other day that Gazprom is slowly getting real on the impact of the big gas surplus, and its best mate E.ON (EONGn.DE) - whom we’ve had a dig at recently - may be edging in the right direction too. Yesterday they published this revealing presentation, which contains some gems:

- they are renegotiating 80% of their long-term gas contracts; ‘clear progress is being made based on constructive, long-term relationships’ (what else would they say ?) and they are targeting ‘limited additional flexibility’ in these negotiations.

We’d surmised they’d been hurting and now we know: their European gas business EBIT is 33% down (and that’s just on realised losses – they aren’t likely to reveal MTM numbers). Hence the urge to re-negotiate. The correct ‘targets’, meine Herren, are (a) a lower base price and (b) gas indexation to replace oil indexation – OK ? But you knew that anyway.

- they reckon oil indexation is still justified by reference to competing fuels, and balances risk fairly (so why are you being forced to re-negotiate ?). Further, they reckon the oil-gas link has only temporarily come unstuck, and offer this graph ('TTF' = Dutch spot market): 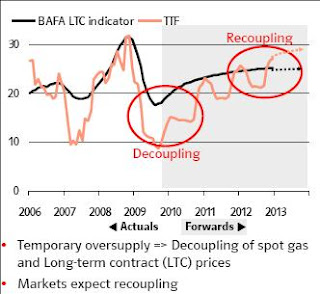 What’s wrong with that ? Firstly, they make the cardinal mistake of interpreting forward prices as forecasts of future spot prices – which they categorically ain’t (there is evidence to this effect in their slide 30, correctly understood). It's only in steep contango because of the surplus. At most their graph shows a forecast crossing a forward curve at around 2013 – so what ?

More significantly, they assume the gas market will still be the same after a period of sustained oversupply: this is to be doubted. Much more likely, a viable spot market will have become established in Germany - the embryonic one is starting to eat their lunch already, as they admit! - after which no-one will quickly sign up for oil indexation again. As they also acknowledge, ‘gas indexed contracts are increasing’.

- they predict a very optimistic V-shaped recovery to their gas sales which, if it comes to pass, would indeed solve 2009’s take-or-pay problem. But will it ? They are bound to suffer a hit on market share after a couple of years of their competitors buying spot gas at half the oil-indexed price.

Let’s be fair, in several places (sometimes in code) there are signs that realism is dawning – and they’ve naturally to put on a brave face. Bottom line: prospects for that German spot market are looking better all the time. (And E.ON are trading like good'uns - trading EBIT doubled - they get the message all right.) Excellent news for the UK as we become ever more import-dependent.

do they really not understand that forward pricing doesn't indicate future spot prices????? Can they be that stupid?

their traders will know better, for sure: I'm guessing it is a bit of grasping-at-straws sophistry in the PR department

that said, it's amazing how many people perpetuate this error, don't you find SW?

I buy my gas and elec from Eon and they are considerably better than the buffoons at Npower. Would definitely recommend them.

ND, I employed a buyer (ahem, I mean of course a "Senior Supply Chain Specialist") once who f***ed us up in the metals market by making the self same mistake. He is now repenting at leisure after doing it twice. I figured first time round I just spent $80k educating the twat. Second time round he went.

Mind you, thinking about some of the wackier senior managers I have worked for in my dim & distant past it is a common misconception. But you assume they get educated fast... and you would expect the PR department not to say things like that in publio.

for example, when the EU Emissions Trading Scheme started and power plants et al were given most of the permits they needed for free, it was almost universally assumed in Germany that this would mean electricity prices would not rise

well b*gg*r me, lo and behold, power prices rose by the amount of the prevailing price of emissions permits ! Who'd have thought it ?

the concept of 'opportunity cost' was completely missing amongst German policy makers and their advisors, and there was a mighty hue-and-cry: how did this happen ??

and yet somehow they make those nice Audis ...

Mark W will come along to explain, if we are lucky

ND, I don't think the average German understands markets any better than the average Brit*. Over there, everything is regulated to the n-th degree so people assume that the government will fix it.

* I had a blazing row with my boss in Germany twenty years ago, i explained to him that tax-breaks for landlords who bought new-builds did not push rents down, they merely pushed up the price of new-builds because the tax-break was factored in to the price. He refused to believe it.

The people who invested in these property funds thought that they were getting a tax-break - they weren't of course, as they were paying for the value of the tax-break up front.

Even the construction companies thought they were getting a tax-break - they weren't either, as profits in a competitive industry are always competed away.

Guess who ended up banking the tax-break; apart from my boss who administered these funds ..?

that's exactly the kind of thing ! thanks, Mark

ND Off topic, but there is a rich vein for a possible story for you in two semi-nationalised companies in the same industry squabbling with each other here: Areva and EDF cannot agree contracts. As everything goes wrong for Areva NP, it seems EDF does not want to pay to prop them up.

Areva recently lost the 4 EPRs for $30 billion bid to the UAE - South Korea won with their first export order for nuclear power.

NB that price works out £4.6 billion per EPR in a cheap labour location, which means EDF would need to raise over £20 billion to finance the 4 EPRs for the UK. And having lost the UAE order, Areva NP needs the UK work earlier to fend off contraction.

Also a FT report that Areva is considering marketing the Chinese version of a pre-EPR Areva design (the CPR-1000) alongside the EPR - obviously the EPR is just too expensive, especially with a strong Euro.

And a denied report that the first French EPR build is heading for a two year overrun. But if true, would help explain why Areva is considering remarketing an older simpler design.

Do you know more background? Looks to me likely that Areva NP is in trouble.

... just out minutes ago: Reuters reporting EDF CEO, Proglio, calling for "a break up of Areva and for EDF to lead the nuclear sector." Also "Proglio ... is said to be close to President Nicolas Sarkozy".

Elsewhere WSJ reports Areva CEO says "no reason at this stage to take any more" provisions for Finnish EPR delays.

The rumblings are very loud!

ND, I hope that helped. But having lived in D, I don't think that the people or politicians generally understand 'markets' any better or worse than we do. It's just that the arbitrageurs tend to congregate in London.