Does this mean we can all use the corporate box at 'sportsdirect.com@StJames'Park' 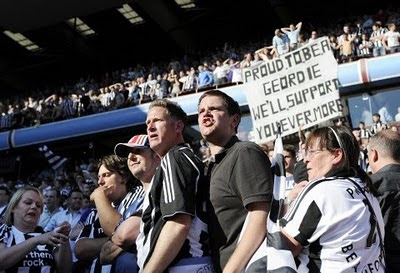 Northern Rock PLC {The Company} the new bank formed following the successful restructure of the Northern Rock business on 1 January 2010, can confirm that it is to become the main sponsor of Newcastle United Football Club says a statement on Northern Rocks website.

The new four-year contract will commence from the start of the 2010/11 football season. The total sponsorship value may vary, from £1.5 million to a maximum potential of £10 million, with payments phased over four years. The maximum potential will only be realised if Newcastle United is playing in the Premier League for the full contract period. The contract is subject to an agreed review point after two years and will expire at the end of the 2013/14 season.

Outrage from the Daily Mail with a nice quote from Taxpayer's Alliance. "Mark Wallace, campaign director of the Taxpayers' Alliance, said: 'I'm a Newcastle fan and even I think it's ridiculous. A bank that needed to be bailed out by taxpayers should be focusing on repaying that money."
Outrage or a sound strategy?
£10 million is the maximum amount that could be paid for the 4 year deal. Newcastle, highly likely to be promoted into the Premiership next season, will receive an awful lot of good press. Mike Ashley will offload the club as soon as he can get a decent valuation, and this should allow some money for investment and players. So £2.5 million, the same as Boylesports pay Sunderland, for the sponsorship with those big local crowd,local market gates is sound marketing. Especially when they paid £5 million a year under the old deal.
Last time Newcastle more than blew that £25 million on Michael Owen at £17 million and £115,000 a week.

If the lessons of the past have been learned on excessive players wages, elderly, injury prone,tempremental players, overgenerous contracts, unrealistic expectations from the fans, and not replacing the manager and full support team every 6 months, Newcastle will comfortably stay up.
And if NR were to put the taxpayer first and repay the £10 million to taxpayers?
Well, with at least £8.9 billion still owing, it would barely register.
Posted by Bill Quango MP

time, surely, for woor Kevin to make another of his happy homecomings ?

Not a bad deal comparatively speaking - Leeds Metropolitan University are paying Leeds Tykes rugby union club eight million quid over the next four years to exit from their ownership/sponsorship deal. Yes, that's right, the university bought 51% of a professional rugby club. And that's on top of millions they've spent to build the new Carnegie stand at Headingley. In fact it's hard to think of a sport they haven't thrown money at.

They're 35 million in debt, and if interest rates go up or commercial property values fall their property development Ponzi scheme will go tits up in the most spectacular fashion.

Not bad for a former PE college.

I think it says a lot about Newcastle United and the "regional" economy that the club can't get a commercial sponsor and have to resort to a taxpayer-owned and pork-barrel-politics-run bank.

I expect it's all Kraft's fault.

Strongly disagree !
Northern Rock is currently a department of the government, and as such renewing a sports sponsorship deal is totally inappropriate.
Whether or not NUFC get promotion and the deal is therefore 'good' is not the issue; the money spent was created out of thin air in the name of the British taxpayer to stop the run on the Bank.
I think it has more to do with NuLab's northeast politics!
What next? HMRC sign a sponsorship deal with "Britain's Got Talent"? DVLC doing "Loose Women"...
Come on guys, more critique please!!

"A bank that needed to be bailed out by taxpayers should be focusing on repaying that money."

Well, you know, the boys and girls have to have a bit of fun.

ND: Yes, NUFC have a been good source of inspiration for us over the years.If only JJB would buy them up...

Anon: We do take adverts.Great rates and packages.

BE:I think Northern Rock is the sponsor of choice for that region.
It will be all Kraft's fault in the South West.

JJ: Maybe. But 10 million isn't much in the scheme. Yet it may well generate a lot of extra business eventually.
Tesco won't mind too much when they buy up the 'good'NR. Every little helps.

JH: Lloyds still doing the Olympics, { as ae Cadbury} RBS six nations. Those directors have to have somewhere to drink and relax.

Heres my tip. If you owe money on a credit card or a loan you dont feel like paying for whatever reason (see bloated slobs above) then write them and ask for a copy of the original credit agreement. If they can't produce it 1. Stop paying and 2. Report their offence in not retaining a copy of the agreement. Nothing they can do and they might get fined! Win Win! I have written off ten grands worth of alleged 'debts' this way...

Whilst I think that the bailout was wrong we all want (need)NR to make a profit so we can get our money back and then flog the damned thing, yes?

NR operates in a market (unlike DVLC which is a monopoly to a captive market)and therefore needs to market itself and its products. Ergo it needs a marketing and advertisng budget.

The questions we should be asking are whether (1) this budget is enough or too much and (2) whether this is an effective use of that budget.

My own guess is that the new management are highly so incentivised to sort the business out that the answer is that its a good move.

Where are the cries for NR to stop all the other forms of advertising that they buy?