A Night at the German Opera 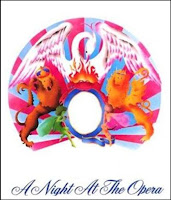 Toni and Cheri, our two indefatigable seekers after wealth, have come to Germany in search of the fabled Golden Sinecure (Das Rheingold). They approach a fat German banker and Toni introduces himself. But the banker is not impressed – didn’t Toni lose office more than two years ago ? Ruefully, Toni admits this is true, and sings the lament Zwei Jahre sind dahin, Dulde, schweige, mein Herz! (two years, dude, and it still hurts!). He suggests that, for a modest consideration, he could make an after-dinner speech.

The banker is strangely moved, and offers a fee of $5,000. But Cheri, disgusted with this miserable sum, pushes Toni aside and gives the shrill soprano aria: Fünftausend Taler!... Träum oder wach' ich? (five thousand bucks ! – am I dreaming, or what ?).

Not for the first time, Toni is forced to apologise for his wife, and explain that she is just a humble Scouse lass on the make - Lass Er doch hören (she’s a bit of a whore). He stresses that other banks value his services greatly, singing Wie freundlich strahlt die holde Morgensonne (how generous are the shareholders of Morgan Stanley). He wheedles and pleads - even Cheri is shocked by his conduct, and in an aside sings: Gott, der du schauest! (God, you’re a shyster !)

Eventually the banker can stand no more, saying he must leave to confer with colleagues before he can make a better offer. Toni responds to the mention of more money with Wie schön ist doch die Musik (how beautiful – that’s music to my ears).

As they sit alone in the banker’s gloomy anteroom, a mysterious figure enters, and Toni regales the stranger with his woes: Ich suche vergebens nach Ruhe (I’ve been sucking-up in vain, all over the Ruhr).

Then he recognizes the figure: it is the ghost of David Kelly ! The phantom intones, in basso profundo: Bei diesem schlimmen Fall (by these slippery dealings, you will fall). Toni rounds on the apparition defiantly: he was right to attack Iraq because, well, because he wanted to, singing Ich war, wenn ich erwache (I’ll go to war whenever I please). But the shade is unmoved, and parts with a silent reproach. The curtain falls on Toni singing mournfully So bin ich verraten (so, that’s me f****d).

To the tune of Bohemian Rhapsody? If so, it works well!

You have to hand it to Bliar: he is a class act. He's got more front than Harrods. Shame about the grasping scouse missus though.

To the tune of Bohemian Rhapsody? If so, it works well!

You have to hand it to Bliar: he is a class act. He's got more front than Harrods. Shame about the grasping scouse missus though.

Don't know what happened there!

Now and again I have visions of Cherie singing Lucia in "Luci di Lammermuir". She would do the mad scene very well and of course it finishes up with blood everywhere.

Oh! what a lovely war.

I quite enjoyed my Blair fix. Perfect reminder just how second rate and unelectable the rest of labour are.

Agree Steven L.
So refreshing to here a load of lies told competently. Blair has that ability to sound convincing. Even with his most preposterous claims.

Luckily for Brown no one has dropped him in it over Iraq yet so he hasn't much to answer. But I'm sure he will appear his usual shifty,uncomfortable,dishonest self. Tough going on the stage after the headline act.

Seriously , you should work this up to a production,it would sell out all over the country.Brilliant!
Votefor.

I have just noticed that you post in blue, Bill in red and CityUnslicker in black. Hah!

MW - hahah, you have us sussed ! (actually we are all one person with a bad case of multiple personality disorder - you should meet the one who writes in green ink)

But no German grammatical errors this time ? I must be slipping

Demetrius - yes I think everything ending in blood is a recurring theme with Blair. Cherie's famous rendition of Lady Macbeth suggests she's good for Lucia, as you say

SW, BQ & various anons - yes it's been a treat hasn't it, what a performer

Brown, Balls, Banana-boy and Harpie are rank amateurs all; Woollas is clearly in training to replace McNulty but hasn't quite made the grade yet, & most of the others don't even get past the starting-gate

I know McShane is a hopeless liar but he does bluster extremely well.

yes Budgie he really does