To War in a Sieve 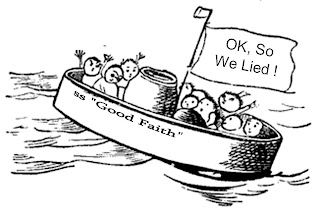 Far and few, far and few,
Are the scruples of Brown and Blair;
Their lies are bold and they’re shameless too,
And they went to war in a Sieve.

They went to war in a Sieve, they did
And totally unprepared
With not enough armour for soldiers to don
With too few choppers – the list it goes on
But Brown, he never cared.
And every one said, who saw them go,
"O won’t they be soon undone, you know!
For the list of shortcomings is terribly long,
And happen what may, it’s extremely wrong
To send our boys unprepared!”

The casualty figures soon started to rise,
The coffins they soon came in;
So to cover their arses they lied and lied
(No sign of remorse for the many who died)
And they gave the order to spin!
And they hunkered down at Number 10
And they lied and they spun and they lied again
”Though the charges against us be ever so long
Yet we’ll never admit we were rash or wrong.
While we have breath, we spin!”

Having just heard on Radio One's Newsbeat that the head of something or other military division in Afghanistan has announced that the force there are about to launch a new offensive very similar to the one that was undertaken at about the same time last year, I cant help but feel sorry for all those poor soldiers who just lost the element of surprise...

The politics of these wars just seems so bizarre but I did enjoy the poetry... even if the whole thing is just such a sorry affair.

Except that weapons were found. 500 shells of somewhat old chemical agents might not sound much, but it could really f**k up your day.

Except the invasion of Iraq f**ked up over 500,000 Iraqi's day and 179 UK troops. And they found 'somewhat old chemical agents'? Devastating. Kim Jong Ill gases entire families just to see what will happen and to this day North Korea remains distinctly un-invaded. Maybe you should take this subject of illegal invasion and mass killing a bit more seriously Richard.

welcome the newbies ! three on one post, probably a record

though not the first ladies underwear avatar, which was brought to us by the great Tuscan, if memory serves

back to the 'poetry' - thank you ma'am! yes a sorry business indeed though that's not a word we need expect to hear from Blair

(nor from moi when it comes to poetic licence, Richard, though in prose I take your point ... and also alan's of course, we do like to keep everything civil around here. Now, about that global warming ...)