Brown's Valantines gift to the UK. A February election. 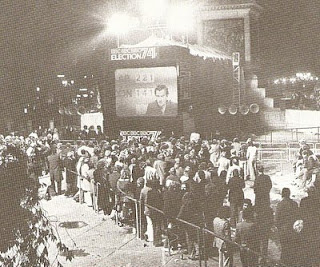 Political Betting have rumours of a February election to be announced tomorrow.
Edward Heath lost his February gamble in 1974. Would Prime Minister Brown, not known for taking big risks, really call an election with so little backing him up?

Well, I would theorise that are some pretty good reasons why he might.
1} Things aren't going to get a lot better, they may get worse. The good Christmas retail figs {6%} masked a pretty dismal December {0.3%} with lousy economic figures for the April quarter, caused by the snow and the fragile recovery faltering. Plus the good, if a little spun, unemployment figures, are unlikely to be repeated with all the seasonal lay offs and some big real job losses already announced {First Quench - Corus - } now about ready to join the lagged statistics. More are on the way. Adams childrenswear failed again today.2,000 jobs at risk. Cadbury?}

2} Gordon can sidestep the leaders debates by going early. There's no time, and it isn't agreed. Even if he has to do some, he can insist on his format of 2/3 Labour audience which producers will have to agree, as will opposition if its just 5 weeks to go.

3} The move will rattle the opposition, especially the Libs and Nats who probably aren't ready. Labour can call on a union loan/gift for a war chest. Would Unite refuse? Who would they rather have in power. Gordon or Dave? Even CWU, who this government has tried to privatise still donate to the Labour party.

4} The Iraq enquiry is making Labour's chances harder. Some bad news on how unprepared the army was by procurement failures today, Goldsmith and the big Blair on Friday. A PR failure for Gordon Brown. But the Prime minister's own 'Cast Iron' guarantee can be neatly avoided. If he is fighting an election he can't be called..As stated in the Chilcot letter.

5} Gordon is televising the 'economic miracle' that sees the UK finally crawl out of recession. It hasn't been televised before. {0.4% is the GDP guess from the experts. If its ,say, 0.6% Gordon and Darling can claim they have steered the country through the economic icebergs and are the most trusted to go full speed to a safe, painless recovery.}
Today's ICM poll is just marginal enough for a hung parliament or feeble Tory win.
T:40% -La: 29% - Li: 21%
It can't get much better for Brown. But it could get a lot worse. Strikes are looming BA , Underground strikes, mail strikes...

This time the good news could launch Gordon to a hung parliament.

There are still plenty of options against. Odds still appear to be 40/1 so the bookies still fancy May/June. Tomorrow could just be yet another damp squib relaunch. We shall see.
Posted by Bill Quango MP

Nice post BQ - I doubt he will go for it. I am still in the he is a ditherer camop and will delay unitl 11.59pm June 3rd!

Wish I could believe it, but have to agree with CU. Latest possible date for gordon.

I don't believe it either.
But I wish it were so.

Gordoom will certainly be biting his fingernails over this one. The question is whether he: cannot make up his mind; or, hates facing the music. If he is just a ditherer he may end up picking February simply because he got the stick for back tracking before. If he is McCavity he will leave it to the last minute.

an early election would also avoid a budget. Maybe Darling's put pressure on.

You beat me to it Marchamont. Either we have a budget that explicitly sets out the spending cuts or we have a run on the Pound during the election campaign. Neither offer much for Labour! They surely have a big incentive to leave the budget to the next lot.

The next lot have to have a budget anyway: if Darling does a budget it will be under Brown's influence and all that implies, and another will be needed in more realistic, post-election terms; if the Conservatives win they have said already there will be an emergency budget as soon as they can believe the figures unrolling before their horrified eyes.

If there isn't an election before May we're going to have a spoof budget. Very bad for confidence, spoofs. Just look at the Greeks and how cross everyone is about their spoof figures and promises.

Wishful thinking I am afraid. I still think we may get a state of emergency declared before June, forcing the gummint to postpone an election for national security reasons.

Brown is too far behind in the polls. There is no way that even Mandelson would call an election when they are 11 points down.

Apologies for what I'm sure is a simple question for you guys, but I know absolutely nothing about finance and the way different areas are calculated, but, how can the economy rise by 0.1% but GDP fall by 4.8%?

Thats the end of that story

His personality and style indicates he will hang on until the very last moment.

If the man could not decide whether go to the country when times were favourable and he really might have won, he wont be more decisive now

- unless he is forced into it.