Will a failed Brown-out lead to UK blockout?

The events at Westminster yesterday make the comic The Thick of It, look quite tame in its parody. Some now quite pathetic ex-ministers hope a simple letter will be enough to get rid of a tenacious and street-fighting Prime Minister.

That the plot failed is not much of a surprise, neither the the lack of solid backing for Brown by his enemies. Brown too did not have the stomach to go for a vote and therefore renew his mandate ahead of an election and get a boost for his personal rating as he would be seen as a toughie.

But the real cost to the country is the on-going collapse of the UK credibility in the eyes of the world. Check out what has happened the past month alone: 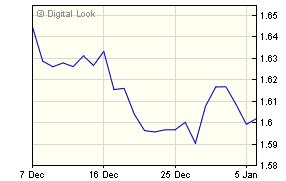 The pound is in a falling trend agains the Dollar (and this is another QE currency to boot). 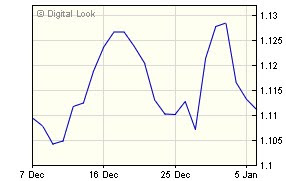 Against the euro the pound is bouncing in a range, but a very weak one with the upsides not lasting for long, suggesting a breakout will be to the downside of an already very weak exchange rate. 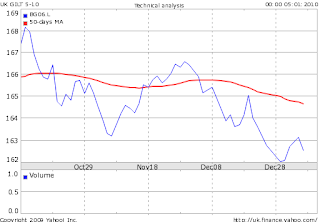 Above is the Gilts price over 3 months, just the last month alone has seen a steep fall to a low not seen since the height of the credit crisis.

These three indicators all show the markets being very wary of current UK economic policy. The gilts price in particular has fallen steeply since the Darling pre-budget.

The Government is running out of credibility with its lack of policies to address our growing deficit:

At this rate the question has to be asked whether the Government can really make it to a June Election without a Sovereign Crisis. Dumping delusional Brown may have been our best chance of avoiding a meltdown, but the charts show we are headed for one sooner rather than later. David Cameron is quite right today - we can't go on like this.

I think that Darling will have won some concessions for his support. He agreed to back brown, but only after a long discussion.
No doubt he made a deal.
I would not be surprised to see some firmer economic statements from Darling and more credible announcements on public sector debt.
Darling knows the scale of the problem. He knows that action may well need to be taken sooner than the PM would like

It looks like we will get a Balls up if we do not get a Brown out.

The decisions to rectify this mess are political. But none of the main parties have anyone of the calibre of Mrs Thatcher to do the job.

Just think: if we closed DfID, left the EU, built coal fired generators rather than windmills, and took an axe to NHS bureaucracy, we could halt projected government debt increases. And we might even begin to repay the debt we already have. Most gain, least pain. But no one with the courage.

I agree, but to play devils advocate:

The rest of the world is not in that much of a better position - it just seems like that because we are here.

So, you want to take your money out of the UK and put it somewhere better - more fiscally responsible, with more upside.

Where is that?
-China, with a possible asset bubble brewing up, and a controlled exchange rate
-Germany, stuck in the EU with Greece

Similarly those outside the UK look in and see the political uncertainty.

This tells me that currency volatility will increase and the range will be wider (and downwards).

Hence my 2010 prediction for an election before the budget. This will be what the mandarins want.

Anon - hmm..How about Australia, how about the EU which has much more financial firepower. How about India which is roaring ahead or Brazil - the risk is not equally distributed everywhere and we are bottom of the class.

SL - or an election before the budget.

for a secon i was amazed when darling gave his support, but thinking about it BillQ is correct. lets hope he gets something out at the beginning of next week.

hoon looked particularly pathetic when whilst giving his interviews he was costed by a backbencher. she told him what she thought of him, and instead of seizing the chance to spell out why bruin should go he just said "alright, good"! what a dipstick

@budgie, what is the DfID budget? i suggested using this cash to help UK poor/elderly and retraining unemployed folk over the short term to some friends. didnt go down too badly.

Having just commented on John Redwood's blog to the effect that the ongoing mess and nonsense could spook the currency and bond markets, I have to agree. This could get nasty.

From the DfID site: "The government's forecast for overseas aid (known as official development assistance - ODA) for 2010-11 remains at £9.1 billion as we pledged in the Comprehensive Spending Review (CSR) in 2007." This is vastly more than the FCO gets (about £1.7 billion).

Well, we could always make an attempt at resorting to autarky. This island is built on coal & surrounded by fish. Of course, we may take a few knocks to our standard of living, but surely that is preferable to honouring our obligations & dealing with this debt?

(I feel I should point out heavy use of irony here. Sometimes that isn't apparent in the written word.)

I object to the use of pink on ANY graph.

(The one on debt/GDP)

The counter point to 'spend yourself rich' must be 'work yourself poor.'

I'm hoping for a nice sterling crisis around the May elections to push 10-year gilts up above 5% as traders turn headless for a few weeks.

As Blue Eyes says, we all know what needs to be done long term.