The Charges of the Light Fingered Brigade 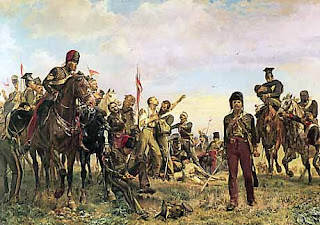 MPs on trial..
Another being charged..
The Keens and Uddin getting away with it..
Tory Peer into the dock...

The expenses scandal that has already claimed so many looks set to rumble on into the election adding new powder to the relatively unscathed Lib Dems cannons.

More than 130 MPs are standing down at the next election, expected to take place in May.


Lest we forget
The last of the grave 600...
Half the mortgage, half the work,
Half a job to do,
All in the Parliament of Wealth
Stode the six hundred. {and fifty}.

‘Forward, the Light Fingered Brigade!
Charge for all expenses!’ they said:
Into the Parliament of Wealth
Strode the six hundred. {and fifty}

‘Forward, the Light Fingered Brigade!’
Was there a man dismay’d?
Tho’ the fees office knew
Someone had blunder’d:
Their’s not to make reply,
Their’s not to reason why,
Their’s but to approve and sign:
Into the Parliament of Wealth
Strode the six hundred. {and fifty}

Journalists to the right of them,
Bloggers to left of them,
Taxpayers in front of them
The Voters thunder’d;

Storm’d at with writ and yell,
Coldly they strode and well,
Into the jaws of Death,
Unleash the forces of Hell
Strode the six hundred. {and fifty}

Redact’d all their expenses bare,
Denied as they turn’d in despair
Spinning the claims as fair,
Charging like barmy, while
All the world wonder’d:

Plunged into the furies-stoked
Right thro’ Party lines it broke;
Tory Cossack and Labour Russian
Reel’d from Martin's removed cloak
Shatter’d and sunder’d.
Then they limped back,
but not
Not the six hundred. {and fifty}
Posted by Bill Quango MP

There was a program on the Beeb this week - celebs pretending to be unemployed.

In there it said that about 7,200 claimants had been prosecuted/convicted for benefit fraud.

So, on average benefit claimants are about twice as honest as MPs

This gives a new spin on 'Right honourable'.

Journalists to the right of them,
Bloggers to left of them,
Taxpayers in front of them
The Voters thunder’d;

Wasted as an MP - become the poet laureate.

If I were your boss I'd be investigating YOUR expenses, BQ.

You obviously have time to kill.