Protection from the Brown Devaluation

Cityunslicker has been a bit busy moving house the past few days. Nonetheless even the lack of internet and television has not hidden the rather sudden collapse in the Pound from me.

For some reason the newspapers are saying that this is all due to the chance of a hung Parliamnet; what they really mean is if Labour get back in the markets will turn a big thumbs down to the UK. Ken Clarke Speaks the Truth.

Also they are very wary about the lack of a real budget date being announced (see more on a later post). This makes the market sorry that the Government is going to try and avoid any painful public discussions.

So what can you do to protect yourself from the fall in the Pound and to judge the coming few months?

Well, here are some suggestions.

Firstly, the key dates are the election and the budget. if labour are doing well then the Pound is toast for both of these, it is probably toast for a budget anyway as Labour will not announce any real spending cuts a few weeks before an election. On the plus side, the end of April will see what analysts think are positive growth numbers for Q1 and so that should  bounce the Pound.

So where are we in currency terrms? Here are a few graphs:

As you can see, the Pound is down 13 cents on the year against the US dollar and very slightly agains the Euro. As it costs 2% or 3% to 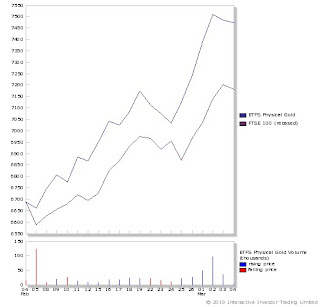 change your currency, these don't look like much of a hedge against a further fall in although the Dollar is the better choice. This is why FTSE stocks that earn their money in dollars are zooming off the charts today (see VOD.L for example). The real standout here is Aussie Dollars, with no recession in Australia, the Pound's trend is well established and 12 cents on the year looks like just the start. if you want o open a foreign bank account for your money, Aussie Dollars are the way forward (Canadian Dollars look similar too).
Somewhat easier perhaps is the final graph, showing the performance of the FTSE and the Physical Gold ETF, PHAU. Both are well up ont eh year, especially the Physical Gold ETF. Of course the Physical Gold ETF can also be held in a tax free ISA or SIPP.
As we approach the budget and the election and you feel worried, the above may be of some help. If on the other hand the Tories appear to take a strong lead again, then the opposite positions will work out. Tin hats for all and good luck!
Posted by CityUnslicker

I remember last time this came up I tipped the Investec Emerging Market Debt fund, which you disagreed with.

Also, my Ruffer Total Return fund seems to jump every time sterling falls. Some clever people there who have made nearly 40% throughout the 2 years of the crisis.

SL - well, I am no Warren Buffet. Emerging markets are certainly the place to be; intrigued by the total return fund - you have a link?

Ruffer - both the total return and European fund have massacred the index since inception and are available through Hargreaves Lansdown for zero upfront fees.

"emerging markets" - remember the old saw? "So called because you rarely emerge with your money intact".

I wonder if that still holds these days?

sounds like a great way to take a haircut.

It has taken me ten years to accumulate my little pension, of which 50% is in UK gilts.

I relish neither the prospect of UK default nor 'starting again' only ten years before retirement age, thank you.