The Battle of Dunbar 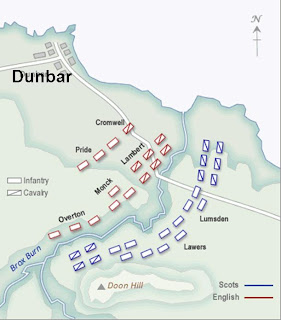 In 1650 a Scottish army under Leven and Leslie was in a commanding position over an English force under the brooding Cromwell that was weakened and demoralised by a string of setbacks. Victory seemed certain for the Scots.

However, the ultra-purist Covenanters held sway over the conduct of Scottish strategy. On the very eve of battle they called for an ideological purge, which resulted in the dismissal of some 80 of the most experienced Scottish officers, and many of the rank and file.

Cromwell, outnumbered and holed up in Dunbar, spotted an opportunity presented by the disarray and uncertain positioning of the superior Scottish forces and struck a master-blow. A night attack by his cavalry broke the Scottish line and rout ensued, with minimal English casualties. Cromwell had plucked an unlikely victory from the jaws of defeat, exploiting to the full his opponents' ineptitude.

Were the scots leaders also getting into bed with dodgy overseas money men and doing their best to make it seem as if it wouldn't make any difference who won the battle?

they were indeed prone to taking support from strange quarters (some years later they tried to save their bacon with money from Central America - the famous Darien Company, which set up operations in the Belize area)

some said that Cromwell was a closet Covenanter himself: there was much similarity between the doctrinal positions of both

I served Her Majesty alongside the Leslie-Melvilles, sons of the Earl of Leven and Melville.

Very good men. Outstanding rifle and sporting shots. The elder one was tragically killed in an avalanche a few years back. The younger one is a good friend.

I was unaware of their predecessor's unhappy loss at Dunbar.

Not very interesting for your readers, Nick. But there you go.

no no, Idle, a sense of history never goes amiss with discerning readers, I'm sure you'll agree

and your point is?