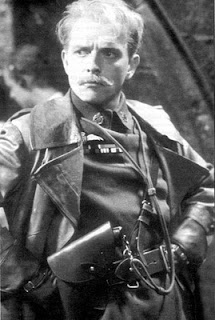 The sounds of aero engines, machine guns and bombs came loudly from outside the bunker.Captain Brownadder was hiding under his desk and shouting into his field telephone to the Unite Headquarters.

“Hello. This is Captain Brownadder. I’m under attack. I need to send a message to Tony Woodley. Message reads. “You bastard! You’re bombing you’re own side. Those British Airways planes are doing damage to the image of industrial harmony maintained by the Labour party. We are suffering casualties here. I’ve lost 2% in the polls already... What? Not your planes. What? Its the Tories.? “

Just then there was a loud explosion and a sheet of flame blew through the dugout entrance.

The silence of the shocked trench was suddenly broken by cheers and hurrahs from the troops. Into the dugout strode an impressive, aristocratic figure.

“Its me!” chirped Lord Flashcroft, removing a burnt piece of broken aeroplane from his immaculate uniform. He looked at Brownadder’s bottom, which was sticking out from under the desk. “Hullo!” he mused. “Expecting a visit from General Mandelchett?”

“Very amusing,” said Brownadder, climbing out and regaining his composure.”Lord Flashcroft. What are you doing in a Labour safe seat?”

“Urghh!” exclaimed Lord Flashcroft. “You mean I’ve crashed into a working class, whippet stroking, flat cap wearing, tin bath soaking, foxy bingo playing, Coronation Street sky plussing trench? Ye gods! I bet there isn’t a soufflé for miles. All mushy peas and Renault Kangoos on blocks in the front garden. .. Well, can’t be helped. I was lovebombing some lentil munchers in a Lib/Lab marginal when I was blown off course by a bit of Non-Dom flak. Took a bad hit and crashed into your squalid bit of the line. Better break into your expenses and get some decent grub up here and ..What the hell is that?” Lord Flashcroft pointed a gloved hand at a grinning Private Ed Ballsdrick, who had just arrived in the bunker.

“That’s my replacement chancellor,” replied Brownadder. “There’s a problem with the other one."

“ Darling keeps getting the figures all wrong does he?”

“On the contrary. That’s what he doesn’t do. Its infuriating.”

“Well I was never very good at sums. 2x2 is 7 and all that. The Tens of millions of pounds in tax that I told Field Marshal Hague he would get for making me a peer turned out to be just 7 shillings and sixpence."

A smiling Private Ballsdrick came forward. “Is it really you sir. Your Lordship. It is really you. Oh sir, sweet mercy. I haven’t met no real aristocracy like yourself sir. Well. Lord Sugar and Baroness Scotland but they don’t have what you’ve got sir.”

“No sir. I mean money. Oh sir. We’re so poor in the Labour party we have to take the scraps off the unions in exchange for seats and policies. Sir, we love the aristocracy, we do. Why old Colonel Blair loved the Toffs so much he kept on making them. A million quid a time. But even our little Lord Levy ain’t fit to fasten your cuff links, M’lord.”

Lieutenant Geoff Hoon came in from the cold trench. He spied Lord Flashcroft and began to burble excitedly. “Good heavens and chips! Lord Flashcroft! The daredevil funder! I say. What an honour. To think I would be in the presence of the biggest spender of the marginals. “

“Great” said Lord Flashcroft. “Right get on the phone Private and get a car and driver to get me out of this dump and back to Belgravia. Ask for driver Bob.”

“No. Not Bob Ainsworth. Who would ever want to ask for Bob Ainsworth? No, I heard that General Mandelchett’s driver was a fruity little number called Bob.”

“I believe a fruit was involved,” said Brownadder, “but might not be quite what you had in mind. “

A half hour later both Ballsdrick and Geoff were still listening, entranced, to Lord Flashcroft.

“You should come over to the Tories Geoff. A chap like you isn’t really a Labourite at all. Why you could be making around £3,000 a day as a consultant with us. We’re always on the lookout for talented types in the twenty millionaires. You can even bring the untalented one if you like. Someone has to make the tea, what?” chortled Lord Flashcroft accepting a mug of coffee from Ballsdrick and looking into it. “Or maybe not,” he added, tipping out the contents. "But the RFC is the place to be."

“I’ll certainly think about it,” said Hoon. “I’ve been spinning like a propeller since Iraq. The Right’s Finance Corp could be the place for me. “

“Well don’t wait too long Geoff. The big push is coming. There’s a future to be had being a high flier, rather than handing out Party Flyers that no one will read. Think about it. The war could be over in a few weeks time.” Lord Flashcroft spied the driver in the doorway, picked up his flying coat and prepared to leave. “ The party can’t last forever Geoff. “

Yes, thought Brownadder. How true. This party can’t last forever. Well, not with me in charge it can't, that’s for sure. I need to think of the future. The future for all of us. Lieutenant Geoff and little Ballsdrick and even Captain Darling. ‘A fair future’ he mused. ‘A future fair for all.’

And an image of a little bakery in a remote highland village was conjured up in his mind. Ed Ballsdrick stoking the fires while a smiling Lieutenant Geoff kneaded dough. A contented Brownadder benignly oversaw the little business, while Captain Darling kept the ledgers. But then an image of the rich and successful Colonel Blair and his ghastly wife blossomed in his thoughts.

And Brownadder grabbed a pen and began to construct a final cunning plan.

I hope you actually have a proper ending for that. Or are you still working on it?

You're enjoying this, aren't you?

So are we. Let it not be the last episode.

If only the writing for BBC comedy was as funny....

Thanks all. Last in the series is up.
Have a good weekend.

I went to see that episode filmed... I think they would have had some fun with your script :)