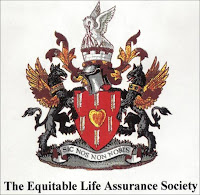 Alongside the areas of High Policy where Cons and Libs should be able to find common ground, is a less well noticed overlap in the respective manifestos - on the subject of Equitable Life. Scandalously, NuLab never had any intention to sort this out, even in the face of clear recommendations from the Parliamentary Ombudsman. Surely Brown wasn't miffed at her ringing verdict: "A decade of regulatory failure" - ? No, that wouldn't be like him at all.

So what do the Tories say ?

"We will set up a swift, simple, transparent and fair payment scheme"

If there's to be another election soon, implementation of this joint promise will cement a few anti-Labour votes.

Declaration of interest ... I leave you to guess !

They stuffed me for a transfer out penalty of 15% IIRC, based on a "market value adjustment" clause which the literature quoted as "will be around 0.1%" or something like that.

That would be good :-) I didn't have one but I know a few people who did.

In the period before the Equitable Life collapse the then Public Trust Office were endorsing and recommending investment in EL products for persons under The Court of Protection. It was already known in the Treasury and related circles that EL was on the rocks. Was the secret kept to give certain Labour and Civil Service people in the know time to get out of EL?

He's going to hang on until October while they do a deal with the Libs.

The man is a walking sterling crisis.

oh dear, thought we would have things settled tonight. even the end of the week looks out of bounds

I still fancy the idea that Clegg could become PM as the price for doing the lib/lab deal.