Labour throwing the election thanks to scorched earth policies 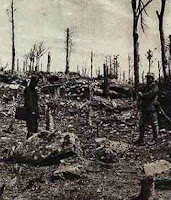 On this blog the three contributors have long been in agreement that the Labour Government knew the game was up on New Labour a long-time ago. As such they decided to make things as rough for the Tories as possible.

Labour new from 1997 the benefit of taking over an economy that was in good shape. It brought them another election victory subsequently and the Conservative opposition could do nothing about it.Then in 2005, when the economy they had inherited was burdened too much by public debt, they simply borrowed money at the top of the good economic cycle to hoodwink the voters. That set Labour up for the 2005 victory.

Now in 2010, the world is in deep crisis. Think of some of the headlines of the Greek Crisis, VAT up to 23%, public sector real wage cuts of 16%. Any country will do well to survive such measures as a democracy.

In the UK the Government knows full well the tab it has run up. That is why there has been no discussion about its record in the campaign, which rests solely on attacking the prospective Tory Government. This is not a strategy designed to win, but designed to lose with core vote intact...able to come back in 4 years time when the country will feel like blaming the new Government.

Times move quickly I note in the US that Barack Obama is blamed for making the recession worse by many of his opponents. He came to power in the middle of the crisis, entirely caused by political and economic mistakes of many years before his period of office.

Tory Bear also has a great list of the Labour Party mistakes of last week. A few would be a coincidence, but this is the worst run campaign I have ever witnessed and has been years in the making/planning. This just does not sit right.

Of course, as Labour are incompetent, they no doubt failed to see the rise of the Lib Dems; neither did anyone else. This makes their strategy more risky, but ultimately more lucrative too if things go right. If we end up with a Lib-Con Government, then Labour will be the official opposition and afforded that base to work with. The downside is that a narrow Tory win and big gains for the Lib Dems will see Labour have to work hard to re-assert themselves as a party of more than the inner city immigrant and Northern non-working classes.

Labour have seen the books though, others too. Mervyn King's slip of last week is a classic - he can see the same as Labour. They never wanted to win it and it is really starting to show. It will be interesting to see how this political strategy plays out for them over the next parliament.
Posted by CityUnslicker

As I've said before elsewhere; if and when the Tories get into Downing Street the first thing they MUST do is publish the real economic figures and make a great deal of it on a regular basis. If they don't and the country goes belly-up like Greece, they'll get the blame and a Lib/Lab government will be in power for a long time to come.

I think you're way off beam here.

Labour are economic incompetents, and by and large believe they've done a good job because they once heard of Keynes at an economics for politics students class back in the 70's. Gordon is absolutely convinced he's done a brilliant job and the Wicked Tories will wreck his achievements. But more than anything they simply care about power.

It's self-delusion and ignorance on a massive scale. Largely down to the fact that most of them have lived off the public tit for their entire lives.

Of course a few of them are Machivellian enough to fit your view, but I think it's a very very few.

I disagree with the analysis.

The mood of the country reminds me of the last days of the Major govt - not from an economic point of view, but more that it seemed no matter what the cons did back then, either it went wrong or no-one was listening.

The general agreement that GB does nothing by spout tractor stats underlines this - if you listen, Clegg and Dave are little better, but because they say 'change' a lot that makes it ok.

Brown's lot honestly believe they did a good job and the Cons will re-introduce child slavery etc, and if people would just pay attention and listen, they would be re-elected and would do a better job.

None of them want to lose.

Obama serves as a living example of what not to so and so the Cons won't make that mistake. They will firmly pin all the tax rises and service cuts on brown/darling.
There will be many.

All these cuts/increases will be the secret ones Brown would not tell you about even though the IFS gave the game away.
Because of their cowardice, the opposition did not have the information to see just how bad things are.

Things will be difficult for Labor.

If they do as expected, there will be a hung parliament, Clegg will get his way up to a point, their current electoral strength - votes concentrated in small geographic areas which guarantees many fptp seats, but a small national share - will become a weakness. This helps the cons too.

If they do too badly, they may lose their claim to be the opposition. This helps the cons as they will be the only 'serious' party left.

If they do too well - you never know - they all thought Major would lose in 92 until he did not, then they get to tidy up their own mess. This helps the cons in 4 years time.

Things are too messy to be machiavellian, or even have a firm plan.
The only way I can see them winning is to leave politics.
Funny how many of them are.

Whilst Obama is not to blame for the crisis as he received a hospital pass of the very highest order from Bush he is accountable for his actions once he has entered office.

All Obama and the democrats and the Federal reserve have done is to give the American economy one more giant sugar high. The unprecedented and massive fiscal and monetary stimulus is unsustainable, doesn't solve any of America's underlying problems and simply guarantees that the ultimate crash will be all the more painful.

America is just 1 year older and deeper in debt.

I don't buy the argument that Obama had no choices. The right choices are painful and politically unpopular. Upon entering office Obama had the political capital to make some of them had he so chosen.

Let there be a hung parliament and let Labour and the Lib-Dems govern in coalition for a further 6 months. The UK economy will come crashing down like a stack of cards the coalition will fragment and a new election will be called. The Conservatives will enter government when everything has bottomed out so the long haul back to recovery can begin. Labour will get the blame that they richly deserve and will never be a force in politics again.

in politics you take power when you can, and apply yourself as imaginatively as you can

initiative and holding the reins are everything

leave the reins to Mandelson, and don't expect to be given another chance until 2015

"It will be interesting to see how this political strategy plays out for them over the next parliament. "

Interesting is one word you could use.

It'll be a bit less interesting - but very unpleasant - to find out how it plays out for everyone else, ie those who will be paying for NuLab's disasters for the next twenty years or so.

I am very pleased to see the mixed reactions to this. Without doubt there are some good points, I agree Gordon is not in on this plan - he is the unknowing leader.

Mark writes very well of Obama's mistakes, but he had so little wiggle room with all the pressures on him; agree they have made mistakes though, but America is in far better shape than the UK economically.

ND - Power, this is the ultimate plan, eternal power, a small sacrifice to miss a few months.

Anyway, we will know whether this is fantasy or reality if Labour refuse to work with the Lib Dems in a hung parliament.