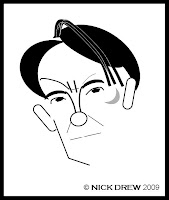 A healthy respect for Mandelson's baleful creative genius is generally in order. But, doubtless exhausted by several weeks of managing Brown - the most difficult job imaginable - he has penned a piece for the Inde which has seen him with nothing left in the locker, save a mix-and-match of limp, recycled confections from this campaign and even earlier. He has scrabbled around in his muck-heap of crapulent coinages, and all he can come up with is this.

"a man who has been tested ... these are serious times and they need a serious person. It is no time for novices, the worst possible time to take a gamble ... Get those big decisions right ... get the big decisions wrong ... the Tories – a massive gamble ... got every big judgment wrong on the recession ... now they are getting it wrong on the recovery ... a three-horse race"

And that's all they've got.

He must be saving himself for the frenzied round of conspiracy that commences on Thursday evening.

The polls look set for a hung parliament. In that case I think a Lib-Lab pact is more likely than a Lib-Con deal. So we could see Gordoom still as PM with Mandleson manipulating behind the scenes, Cable as Chancellor and Clegg as Foreign Sec. PR as part of the deal of course, as anticipated by Brown. You see, the LibDims will go after substance and power rather than Brown's scalp which as far as they are concerned is just posturing. Just thought I'd make you shiver.

it all gets rather silly after that