Capello - Even Further Out Of Joint 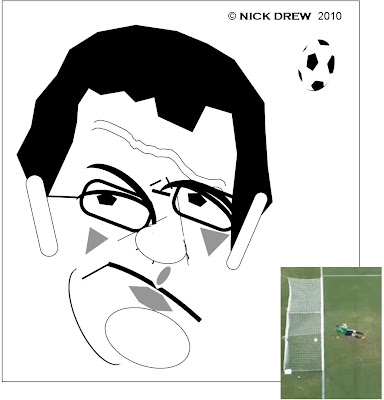 Email ThisBlogThis!Share to TwitterShare to FacebookShare to Pinterest
Labels: DigiGallery

Good effort and maybe a last look at him.

Maybe he could job swap with Tony Hayward.

1. Need an English manager
2. Sack the manager
3. Overpaid..managers and players
4. No passion..
5. Need to play at a higher tempo.
6. Manager doesn't understand the game
7. Sacking Terry as captain
8. Don't take unfit players
9. Play too many matches in Premier league.

1. like Steve McLaren?
2. because that helped Newcastle and Man city?
3. Like Michael Jordan or Aryton Senna or Jose Mourinho?
4. like those clinical Germans?
5. Like the greeks when the won the Euros?
6. 58 games UNBEATEN in Serie A
7. Because Terry was a superstar at this tournament?
8. Because there were loads and loads of other choices ..like ... Walcott and erm..well..maybe..all those uncapped players.
9. But Messi and Tevez have played more than Rooney and Gerrard?
{but this is possibly the best excuse to examine. Lots of premier league players are not firing at this world cup. Torres, Anelka,Pienaar,Gallas, Drogba, Cesc Fabregas.. }


England qualified with their best ever performance top of the group, games to spare. Previously they had failed to even qualify for the Euro tournament.

By all means sack the manager if it makes us feel good but it isn't going to make much difference.

Sadly, I don't know what will, otherwise i'd apply for the job.
But I do know going to the interview with a cross of St George painted across your face and three lions tattooed on your biceps and saying "Gotta be passionate" is unlikely to land anyone the job.

Although the press were right in that the main issue is tactics. Why have a mobile lampost like Heskey on the pitch? Why have a defence so challenged by pace and yet cole and johnson not pushed to cover the central defenders.

Odd that the answer is really tactics as that is the ONE thing we pay Fabio for. Sadly, all the managers seem to come back to it and that I can't explain.