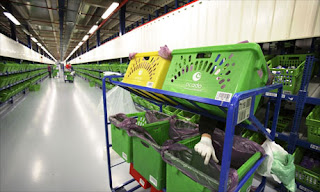 We had a think about Ocado a few weeks back, wondering what they were up to with the new warehouse, and why would anyone risk an investment. Money Week had a good piece asking much the same questions as we did and in the comments someone mentioned driving times. That's the law see. Prevents fresh food deliveries beyond a certain point. Royal Mail moved all of its delivery times up by a few hours when 50mph maximum speeds came in.
{Well that was the excuse for 1st class post meaning before 4pm}..but we digress

Since then the online grocer Ocado recently signed a 10-year agreement with the supermarket Waitrose, boosting its chances of a £1bn flotation. Ocado's existing contract with Waitrose was due to expire in 2013, but the agreement extended the supply relationship until 2020. The new agreement will also enable Waitrose to grow its own home shopping service without restriction from July 2011 within the M25.

But £1 billion! For a company that delivers for other supermarkets and hasn't made a profit in a decade.. Seems an awful lot.
A £1 billion valuation would see the company trade at 40 times ebitda, compared with Tesco and Sainsburys, which trade on seven and eight times respectively. The founders think this is more like the next Ebay or Amazon, with huge , huge profits to come. And Ocado sent an email to customers informing them they can buy shares IF they have spent at least £300 by July 24th. I do hope customers realise that Ocado delivers for Waitrose. It isn't Waitrose. The John Lewis pension groups investments are expected to be sold at flotation.

So is this the new M&S. The middle classes retail shares of choice? The deal of the decade?
Ocado has made great strides this year but I'm not sure in the budget conscious times about to arrive that this will continue. Remember Nick Clegg in summer 2008, as the recession started to bite, said that his family were "gravitating away from Ocado towards Sainsbury's, just on price. I have to say, the difference is pretty big".
I see Mrs Q has spent only about £100 on Ocado this year. She now goes direct to the store when she is in the town. Combining trips to the supermarket with something else.

Can't say I'm overly tempted to ask her to ramp up another £200 to get those shares.
Posted by Bill Quango MP

Ebay and Amazon are highly scalable with cheap distribution.

Ocado is a niche retailer with a targeted clientele. Good for them in mining this wealthy seam but the proposed valuation is absurd. Even logistically it does not have much going for it, the software is apparently not that hot and the fleet of delivery vans is a big expense.

I'd love to read the sales pitch, plus to see some analyst comment on the business, the justification behind the valuation.

Sounds a bit dodgy to me.

Would Waitrose buy it? What would be its exit PER? Well, Waitrose now has its own systems (home delivery by Waitrose.com). Ocado have left it too late, leaving in not enough profit for the next guy. That's what happens when you are too clever by half, and greedy. Spot on.

Btw, does eBay look good with Paypal? The rating use to be ridiculous. The shares are in US$. Probably a better bet than Ocado.

I would bet (am betting) eBay against Ocado given the coming hardships for most people. eBay is perceived to be cheap for starters...

I 'gravitated' away _from_ Sainsbury's "just on price" a long time ago.

Not sure it is a good idea to buy Ocado, neither is it a bad one.

- It is a dense population there, there are efficiencies

- They can deliver anything fragile/fresh, you would not leave your strawberries to the Royal Mail/DHL...

- Easily substituted. I can always just go to the shops.

- Hard to replicate efficiently across the country. They dont serve bristol / bath

So,
They should be able to make money out of the business, but not much, and significant growth will be expensive.

exiled economist:
Quite right about Ebay and Amazon. The models are not the same at all.
Not to say Ocado might not be a flyer..

James Higham: Time will tell. We might be missing out on the 'next big thing'.

measured: I read once that Paypal has as many bank accounts as a big four bank. Many in credit. There must be some next stage to take those accounts.
Outside of M25 its all Waitrose.com.

Timbo614: eBay is perceived to be cheap. Quite right. But Ebay have changed to a set price model instead of an auction now. Feel its lost its value tag.

Budgie: You wouldn't have thought Mr Clegg would have worried too much about the price of shopping. John Lewis list and all that. His food expenses were even a few pennies more than my own.

Mr Clegg claimed the maximum £23,083 under the additional costs allowance for second homes, in 2007-8

Andrew B. Very good points.
The bad should have an additional.
The other supermarkets are operating direct from existing central warehouses and stores. These are supported by their core business profits. The home delivery is a small additional cost to the existing business.
If necessary, in a major price war, or as a market driver, they can always go FREE delivery.

Indeed a great article, by the way I am an engineer & work for Field & Technical Services. & I am quite satisfied & happy with them. Currently we do have openings for technician. If anyone is interested click here Field and Technical Services LLC .