These are not the Kumquats you are looking for 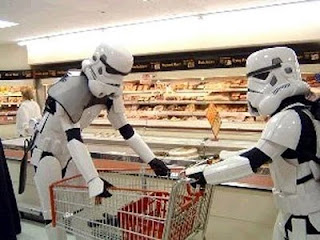 The rise of the self-scanning machines
Tesco announced another bumper year with £3.4 billion of profits. The supermarket giant marches on.
Tesco announced a lot of Gordon brown sounding initiatives in its Corporate Responsibility Report.

Tesco's intention is to become a zero-carbon business by 2050. It also indicated that it will open what it claims to be the world’s first zero-carbon store in Ramsey, Cambridgeshire. Additionally the firm aims to grow sales of local produce by more than 20% in the UK, and is on track to reach £1 billion this year. As part of this Tesco is to hold 100 “community fairs” this year, giving local food manufacturers and good causes a platform to display goods and appeal for volunteers.

All very good sounding news. Less good sounding is a community of nuns who have incurred the wrath of Whitby by wishing to sell of their land to the Tesco megacorp.

The BBC has a report that reads suspiciously like a press release, "More than 2,000 people have signed a petition against the development, which would create about 300 jobs also include 90 affordable homes and benefit shoppers."
The Order of the Holy Paraclete refused to comment.

The thing is Whitby isn't small. The Whitby parish has a population of 13,594. It has rail,road, bus and sea links. Its a seaside town. Tesco have gone to places smaller than this. West Byfleet has a Tesco {mini}and a Sainsbury's for a population of around 5,000.

5,000 is the sort of low base starting point for a Supermarket. Whitby seems big enough to cope.

For those who decry the rise of the checkouts there is more bad news. The World Cup is moments away, the weather is good and last summer was bad. {The May super heatwave was coming to an end this time last year}. The previous World Cup tournament in Germany was worth £1.25 billion pounds to the UK economy, according to the British Retail Consortium. Tesco earn something like £1 for every £7 spent in shops in the UK, May/June is going to show a large increase in sales. Especially for Tesco.
Posted by Bill Quango MP

"May/June is going to show a large increase in sales. Especially for Tesco."

Only if Tesco can do me the 40" LED TV that I want for considerably less than it currently costs!!!

There are a lot of Tescos in Stoke, a big fuck-off one close by where I live, but I never go there.

I don't think what they offer is particularly good & I don't like the extent of their market share or the use to which they put it, for example their support for a minimum price for alcohol, which this Andrew Lansley seems to have slapped down, but which is promoted by Leahy & his sort out of self-interest. As someone who is going to get wankered tomorrow night I say no!

Under the last government, we had sucking on big business & the City's cock, but I don't think they truly respected or understood the market. With any luck we no have a bit more respect for competition I hailed Eric Pickles' stance on "planning" in this regard.

I do not care much for reactionary nostalgia, anti-capitalism, etc. but if I lived in Sheringham or Machynlleth (which I visited 5 weeks ago) I would oppose the building of a Tesco. The last thing they want is for their food culture to be effaced so they end up like us.

I go to a farmers' market, it eats up a fair bit of my budget but buying stuff that isn't fucking shite is important. I've always said that what goes into your own body is a lot more important than being trendy. You surely don't have to be a protectionist to join me. Not all at once though, I like to get a parking space up close to the front :)

BE: I am still surprised when I hear people say 'I need a new telly..I'm off to Tesco."
Whatever happened to Rumbelows ?

Asquith: Good to see you again.

I don't often shop at Tesco and am more of a Sainsburys / Waitrose.
Plus Mrs Q buys a lot locally as we still have a butcher and baker and greengrocer and farmers markets. But Tesco are the biggest and most powerful and have about 1 in 10 of us as full time shoppers there. They have such market penetration now that they will only get bigger.

surely as capitalists, this level of market dominance can't be condoned?

I read this blog a lot, I just can't really think of any particular comment to add most of the time :)

Whitby is a wonderful town which would not be improved one iota by a Tesco. It still has local butchers, grocers etc. There's a big Co-Op and a branch of the very wonderful Boyes.

Roym: There is a dominance within the market but not a monopoly. Tesco/Sainsburys/JL Waitrose/Lidl/Morrissons/Co-Op/Aldi/Iceland and many corner shops/filling stations and farmers markets etc.

Asquith. You are always welcome. The silent majority.

Laban: There is a Tesco about 5 miles from my constituency home village of 3,200.
The impact was minimal. People still have to travel there, and although its convenient as its open some 5 hours AFTER the local shops have closed, for many, day to day shopping is done in the village, and the small CO-Op is as busy as ever.. The big savings in supermarkets are price and time and in rural areas time saving is a lot less of a factor, as the sms are further away. I expect the BIG supermarket shop for toilet rolls/washing powder/ will be the main thing that moves.