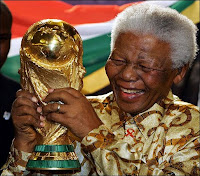 Weekend fun.
If you were a betting person would you bet on

1} Wayne Rooney getting injured
2} Wayne Rooney getting sent off
3} Wayne Rooney getting sent off and injured
4} David James does the save of the tournament and then a cross /lob causes him to backpeddle with the ball into the net.
5} Maradona plays Tevez .. in goal
6} England beat USA. Obama declares sanctions on the UK.
7} France will hand ball in the box and then score.
8} Germany somehow limp into the final despite never appearing to have scored a goal.
9} If England win, team are invited to Downing street. If they get knocked out they are still invited, but only meet Clegg.
10} Disallowed goal by North Korea leads to war.

According to Ladbrokes - Spain are favourites to lift the trophy at 4/1.

A cheeky 500 on the All Whites could net you 1 million quid.

Australia have had bad form of late
but they did very well in the last tournament and might be worth a look at the 150/1 on offer as might the USA at 66/1.

I think 1, 7 and 8 are fairly safe bets. 10 is unfair because N Korea will start a war whatever happens.

There's bound to be plenty of outrage when one of the teams uses language that an be construed as racist.

I'm running a Fun Online Poll on how many violent deaths there will be.