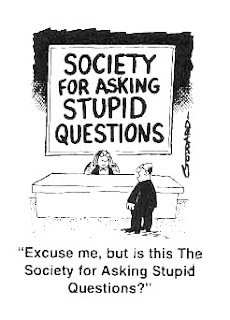 Think of 5 questions likely to be asked tonight on BBC's Question time show.

Immediately after QT, Brillo's TW will feature his grilling of Li'l Ed Miliband. In previous interrogations of leadership candidates he has fixed on a single line of attack (for Abbbottt - your views on West Indian mums are racist; BananaBoy - you covered for torturers and are unfit to lead; Balls - you are a disloyal little git and unfit to lead): what will it be for Ed ?

Winner gets a vote in the leadership ballot.
Note, winner must pay own subscription to Labour Party

climate change deniers are 'profoundly irresponsible' might be the one, but its a pretty easy lob for him.

Ed will get it easy and just get grilled on him not really having a chance or it being a mili/mili stich up.

EdM - Being too lightweight

Miliband - You love the Parties left wing in opposition and the right wing in power. Why is that?

Milli-E question based on a quote from Wikipedia

" In 2004 he was appointed chairman of HM Treasury's Council of Economic Advisers, directing the UK's long-term economic planning."

Not very good were you?

Miliband: "you wrote NuLab manifestos, which you are now disowning and are therefore unfit to lead etc etc"

1) G20 copper gets away with it, who is surprised?
2) Her Majesty leant on by Condems to ban Griffin
3) Stagflation soon - why else would they have pulled NS&I offer
4) 'Call me Dave' Dave, poodle or idiot?
5) 'Death Tax' back - Condems can't be trusted on anything
6) Only 1 in 10 coppers actually fight crime, what's wrong with this country!
7) Are ladies really most attractive at 31?

Why does google sign me out all the time?

Only caught the last bit.. so questions taken from Twitter.

1. Griffin's ban
2. Big society is a cover for big cuts?
3. Should the Burqa be banned?
4.Should Alex Salmond go to USA to explain what he did?
5. Tomlinson. Is it a cover up?

Mr Drew takes the prize. Good spot on the niqab and Greenie.
Odd no 'gaffe' as that was lead story all day until BNP bumped it.
Last one for a while. Its tough being an MP. Just the 7 weeks off in the summer..

This Week and Mr Drew will be judging the Ed Miliband competition later on.

a bit unfair all round, as Brillo departs from the single-thrust approach - perhaps because Ed is the hardest to pin a label on

so he brackets the main thrust with a salvo of other qns, and in the process spends far longer on Ed than the other candidates

and a real bouncer:
- your family dodged IHT when old man Mili died, didn't you ? (will we be hearing more about this ?)

but the centrepiece was, as *ahem* predicted

- you wrote NuLab manifestos, which you are now disowning and are therefore unfit to lead etc etc

when the smoke clears ...

Prize: I shall graciously (and swiftly) step aside and let Miss CD vote in the Lab Leadership: click here - oh, and have your credit card ready

Thank you Mr Drew.
I would vote for Dianne, as I want one of those I love Dianne Tee shirts.

Everyone knows that the real reason Griffin was uninvited was that he was using Lynx deodorant, rather than a more acceptable brand.