A year ago we looked at what the Olympics ever did for employment in the East End of London, given all the Brownite rhetoric about regeneration, providing local jobs etc etc. The answer was a resounding 'diddly-squat'.

It was pointed out, however, that construction was only just starting to ramp up, and that Things could only get, errr, Better.

Yup, Things have got Worse. We show here Newham and Tower Hamlets, the two bo 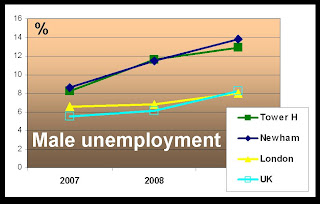 roughs closest to the action: the picture looks the same for Hackney and Barking / Dagenham. Male unemployment rose as steeply in these places as in London and the UK as a whole. Indeed in Newham where the main Olympic Park is actually situated, the rise in unemployment is steeper than anywhere else.

We can, of course, still blame this all squarely on Blair & Brown ... except that I reckon Boris has been in post long enough to have done something about it if he could be arsed.

Still, no-one seems to care. And Tessa Jowell marches on: appointed to the Olympics Board, and now, FFS, a Google-Maps Landmark ! Surrealism doesn't come richer than this.

Ah well. Now they are asking for thousands of volunteers, so that'll provide a bit of outdoor relief. Cynic ? Moi ?

there was a chap on R5 this morning talking about derbyshire concrete. might not be e.london but at least its english.

A local construction firm I know of has had no work from the project. They were told to bog off on day one.

Run your own pub and post office, library and village shop.. all unpaid of course.

The future is looking very unpaid.

Bill Q is spot on. They want me to volunteer? Of course I will...how much are you paying?

I think people in London are going to be truly shocked at how little the Olympics ends up giving them.

Quite so JT.
The Dome even made it into They Meant Well, Government Project Disasters
by
D. R. Myddelton.

"...These problems have their roots in the wider economic problems of undertaking quasi-commercial ventures in the public, rather than in the private, sector. This results in well-meaning politicians and government officials wasting huge sums of taxpayers' money."

My son and several of his workmates, all qualified electricians and all out of work visited the site last year to look for work. They were confronted by a security guard (Eastern European) and warned not to come back unless they wanted a beating.

Boris was on BBC Breakfast this am enthusing about it and emphasising that there would be huge benefits after the Olympics as this part of E London is being completely redeveloped.

Apparently it will all be completed 1 year ahead of schedule. This must be some kind of record.

Presumably the current workforce are mainly immigrants if the local rates of unemployment are going up.

Who knows whether it's a good or a bad thing. It has to be better than the fiasco of the Dome though!

As for value for money, well that doesn't come into it. Funny how we never heard the same kind of arguments about the Millenium Wheel which seems to have been an unqualified success. Maybe because government didn't have anything to do with it!

The key will be to have the finance in plae to buy the assets post the games for a song in say 2015 when the Government tires of pretending to know what to do with them.
It served the buyers of the Dome well, the O2 is now one of the most profitable venues in Europe.

how about the C@W Beach Volleyball Park ..?

I'd be quite interested in a similar kind of look being taken on the figures that Donald Trump & his mouthpiece George Sorial keep spouting about how his white elephant golf course near Aberdeen (real reason for building golf course - to build several hundred houses & a whacking great hotel) - jobs, tourist money etc.

Something about them smells extremely fishy...

Like a lot of these sports events the Olympic games sucks money greedily it builds up the egos of politicians in reflected glory, Montreal was and maybe still is in debt after the Montreal Olympic games. What else could have been done with the money which would not of course have been there because there was no money available aka Falklands war, the dome as an event was a complete washout money take from National lottery paid for that, again it is helping pay for the LONDON Olympic games, look who is doing very nicely from the Olympic games not the people and businesses of east London.

Yes, I'm thinking there might be a fair bit of brand protection work going.

I wanna suck on the olympic teet too!

There'll be even more unemployed in the East End when the Nigerian Synchronised Swimming team abscond from their compound.

I've always thought the Olympics is a cheaper way for our politicians to go grandstanding than war. Looking at the sums, I am no longer so sure. It's a lot to pay to add to the gaiety of the nation.

Yes a sham it is, and we are set for another sham with the commonwealth games coming in a few months time.