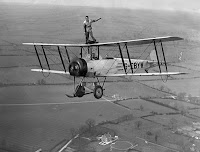 Ryanair to make passengers stand. Somehow missed this story from last week. Its just the thing I like because it looks exactly like a provocative PR piece.

The low-cost airline would charge passengers less on "bar stools" with seat belts around their waists.

Michael O'Leary, the chief executive, has already held talks with US plane manufacturer Boeing about designing an aircraft with standing room.The Telegraph had the 'perches' priced at £4 a ticket, but the Metro had £5.

Seems incredibly unlikely. I fully confess to knowing nothing about aviation and aircraft design but Boeing would have to make the changes, which I can't see them rushing to do. The Civil Aviation Authority would have to change the rules on air seat belts. That ping and the little light that goes on to tell you to sit down and belt up isn't just to stop you bashing yourself. Its the law. How families would be able to travel with toddlers and infants isn't clear. The perches would need to be adjustable to allow small child use, or be different sizes, complicating what is currently a simple system.

And no eating trays I guess. Presently these fold down and cover the knees and extend to the chest. To have a tray would mean no saving in legroom,negating the point of the story which is to pack in more passengers. Maybe they'll be a buffet?

The overhead luggage racks would need to go too. Its not possible to fully stand underneath them at present. That causes a problem for the oxygen systems and lights and air con contained underneath them too. The under seat storage is lost too, including the lifejacket, but that might fit in a pouch on the seat in front.. The windows would now be at the wrong height too, as would the weight distribution with many more people in the tail. And the added increase of 50 passengers and their luggage increases the overall weight, so increases the thrust to weight ratio, which means burning more fuel, or changing the engines... might mean further luggage restrictions or something for Pratt and Whitney to work on. The £1 to use the toilet charge might also generate even more anger as two toilets need to be removed to create the extra vertical seat space.

Is this beginning to sound like some sort of spin story? A diversion?

Jaunted.com, who seem to think the stand up seats story is likely, also seem to have found the reason for its sudden announcement.

Are you sure they're not just releasing Bob Newhart sketches?

Saw this story some time ago. Used it in a college project last year as a guide on free marketing. O'leary is a genius for saying the most inflammatory things,to industry and passengers in order to further his business. He likes to portray himself as fighting the machine for the little man while refusing to pay compensation and forcing down wages amongst his staff. He's a capitalist genius!

They could put a blanket in each wheel housing too.

The only things I don't understand are (1) why Ryanair is still described as a "low cost carrier" and (2) why anyone flies with them, ever.

They're known down our way as "Fuck Off Airways"

This may well be a joke, I don't know.

But if oil prices stay in their long term bull market (peak oil or china demand or whatever) and oil heads back up to US$140 per barrel and beyond then airlines are going to have to work out how to fit many more people on each flight and charge them a lot more than GBP5.00 for the privilege.

Scan: I haven't heard that one. It is very Newhart.

EK: Room in the hold too no doubt. Need some way to keep them breathing though.

Weekend Yachtsman: i have never flown with Ryanair. Where do they fly to that I never go? Germany?

Mark: How can you increase weight without increasing fuel burn? There doesn't seem any alternative to INCREASING prices.

At 6'6" I spend most flights standing anyway, so I like the idea. Better to be upright anyway.

This story just sounde like sbdy having laugth tbh. The type of feeble joke Frankie Boyle comes out with on Mock the Week.

I used to fly FunO'Air to Cork on a regular basis for business, it was hilarious

the mad scramble to get a seat that wasn't ripped (like the old joke about the camels - you wouldn't want an ugly one, would you?)

there was always a complement of hearty lads at the back - stag parties, or fishing, or golfing - and they'd heckle the announcements: cracking humour, the whole way

they had a few things to say about paying for a beaker of water - not that water was what they were sipping, mind

the traditional crash-landing in high winds at Cork rounded the experience off nicely (they built it on the top of an exposed hill on the seaward side, because a local politico owned the land ... allegedly)

BQ: I'll find it on my mp3 player and send you a copy.

"You might want to alternate your hands in the straps above your head ever 30 minutes or so. Those in economy...err...you don't have any straps."

we could start on our Russian internal flights stories next...

ND: Fun O'Air to Ireland. Sets you up nicely i should think. And airports in strange places... I can feel a piece about Boris island airport and Maplin Sands coming on..

Cheers Scan. I haven't listened to any Newhart for years.

ND. I remember an Egypt air flight where the plane barreled down the runway and then slammed on the brakes as one of the hold doors kept popping open. This happened three times.

A large Horus was painted on the bulkhead. Made me feel safer anyway.

There used to be an old joke about Aer Lingus being the only airline with outside toilets.

Yep, I was right, this story was doing the rounds exactly one year ago here in Ireland.

Like I said, O'leary is a genius for free coverage.

anon: Well remembered. The beauty of modern media for the political or corporate is that press releases go out unquestioned.
Next week they might announce a 'glider tug' that is towed behind a normal aircraft. £.50p a seat. Someone would print it.

Never had any mad flights myself, though my father recalled pointing out to a stewardess on a flight in the fifties, that one of the engines was on fire on. "Yes", she said, "please don't tell anyone else..." :-)

Actually, one near mishap. Stacked above Heathrow we came out of cloud so close to another plane you could wave to the passengers on it. As many of us did.

EtB:
That would have frightened me from ever flying again.
I panic when the pilot has to go round again.

The overhead luggage racks would need to go too. Its not possible to fully stand underneath them at present. That causes a problem for the oxygen systems and lights and air con contained underneath them too.

I presume you'll pass this on to the aviation authorities, of course.