How long can this be ignored? 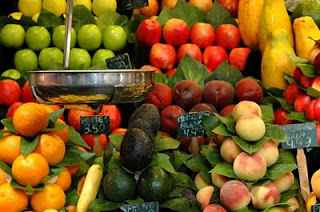 The British retail consortium monthly shop price inflation survey reported inflation fell 0.1%.
Good news. Or it might be if it wasn't still 1.5% up from last year. Food rose 0.9% and is running 2.5% higher than last year, with fresh food leading the hike.

"Good news for customers: Shop price inflation remained low and well below other measures of inflation as a slowdown in nonfood prices compensated for an increase in food inflation," said Stephen Robertson, BRC's director general.

BRC said that despite the increase in food price inflation, partly due to higher animal feed, palm oil and cocoa prices, its central view is that the recent period of high and volatile shop price inflation "appears to be over for now." It warned, however, that "the recent shock in the supply of wheat is likely to put pressure on food inflation in the coming months."

The drought in Russia is putting the pressure onto wheat prices. For those following our cocoa story that price is still slightly down. So it seems that the inflation in food is being offset by cuts to prices in non food. Heavy summer discounting, as we anecdotally reported, does seem to be widespread.

CPI stays stubbornly at 3.2%. An analyst on Radio 5 said that the fears of an interest rate hike, due to the inflation numbers on food, were just fears. The economy is too fragile, the worldwide recovery is too weak and the damage to borrowers of a rise too catastrophic to allow Mr King to permit it. The reporter concluded that interest rates would not rise this year and probably not next year either.
I would agree with that. Except for the next year bit....

One of the UK's leading fashion chains, NEXT, warned today that prices may rise by as much as 8% next year due to higher costs and January's VAT hike.

That is a real problem. A VAT hike at a time of the traditional winter increased fuel bill is going to put real pressure on the MPC. NEXT are blaming an increase in cotton prices and the VAT jump for the predicted price rises.
The VAT rise will land on the non food items that are currently helping to keep the lid on the inflation beast. NEXT has already lowered its numbers after a promising start. Sales have slowed.
How will the government deal with rising prices and falling sales, whilst being unable to raise interests rates for fear of brining the whole lot down? Will they just grit their teeth and hope it takes care of itself?

Easy - fiscal "consolidation". The UK has been running a massive deficit = stimulus. When the taps are turned off inflation will surely collapse. Also, the pound has stopped falling.

Food prices up by 1.5%? You have to be kidding me. I shop regularly for food and my impression from what I pay out is at least 5%, admittedly down from the c10% it was last summer. They didn't admit that either.

Rising prices are a symptom of inflation, not its cause.

Printing money is its cause. We have sown the wind, and we will reap the whirlwind in due course.

Rising interest rates? Bring it on! I am currently getting 0.1% on my savings - a bit rubbish, to put it mildly, when inflation is running at 5% (which is what it is, whatever Broon's spurious CPI says)

BE: Its fairly easy to get inflation to collapse. Its harder not to let it take the economy with it.

Budgie: You may well be right. Fresh food prices have been rising the fastest. 4% ish. If you've been buying vegetables instead of baked beans you'd notice. And its all relative anyway. A large fall in the price of tinned tomatoes can mask a large rise in the price of milk. On paper there is no change. In the pocket its very noticeable

Weekend Yachtsman: There is a real danger that you won't get the rate rise but will definitely get the price increases.
The 8% increase from NEXT is real. Based on the prices today. They are forward buying the spring collection.
A £20 top today will be £21.60, or more likely £22, tomorrow.

BQ, retailers are not likely to be in a very strong position especially on discretionary stuff like "tops". If Next shove their prices up by 8-10% then people will just delay or cancel purchases. Food is volatile. Bread is currently £1, down from about £1.20 at its peak during the "food crisis". Maybe it will go up again. Most people in Britain can afford to pay a bit extra for their food, although perhaps some will have to cut back on iPhones, big screens and cinema tickets. Apparently beer prices are set to rise too, maybe the government will be quite pleased about that.

Spending cuts are much more likely to have an effect on inflation than the VAT rise.

Could be Blue Eyes. The cuts and job losses may well curb inflation.
But those prices are real.
Purchase volumes are down and forecasts are down.
Business is expecting a slowdown in sales and has factored that in.
On the shelf there might be only 6 of those tops at £22, instead of 12.
And if they don't sell, they can be discounted, but the ticket price increase on the day they go on sale will be genuine. As it will across all sectors of the UK.

It is stagflation like the 1970's. The idea is that the Bank of England and the Government make everyone poorer, but quite slowly, whilst righting the debt disaster of the ship.

The hard part is keeping interest rates so low so that savers think they are being ripped. When in reality inflation at 9% and interest rates at 5% would be the same situation that we have today

BE said: "Most people in Britain can afford to pay a bit extra for their food ..."

Well, maybe you can, but the low paid and most pensioners can't.

We already have obesity, malnutrition and poor health because many people's diet consists of processed wheat flour, fat, sugar, salt and chemical flavourings and little else. This will make it worse.

I sometimes get the impression that the purpose of the establishment over the last 20 years has been to turn us all into impoverished, badly fed, badly educated, state dependent serfs. Except for themselves, of course. Certainly their policies have had that effect.

Never mind irrelevancies like food - what about wine inflation? That's way out of control.

Marchamont: Rose wine joined the inflation basket a few years back, that's when it all went wrong.

Budgie.
from the Telegraph
10%+ food inflation by January.

Anyone remember that consumer program on the beeb about 30 years ago, it included the price of "average" weekly shopping basket for a week, funny when Maggie came into power the it was mysteriously dropped, something like that should be re-introduced, public service and all that. There are lies, damn lies, and what the government spouts in the hope that the populous believe them.

The reason so many "poor" people are FAT is because a) they eat too much and b) they prefer delivered pizza and processed rubbish because they are too lazy to buy fresh stuff and make their own food. It is a fact that making your own food from scratch is cheaper than buying processed.

Nobody is genuinely poor in this country. Not a soul. We have homeless shelters, subsidised housing, and welfare benefits which take even the most hard-pressed person to a level that was unimaginable for middle-class people 100 years ago.

Go around to the average fat person's home and you will see phones, iPods, big tellies galore.

BE: Poverty is a measure. 60% measure at that. So 60% of the country is poor.
But you mean really poor? There are some. There must be. Pensioners do freeze to death and die of malnutrition. Some children do have no toys.
I think this is IDS territory. He wants to devote the resources currently used to aid the many to better aid the few.

Its a topic that really needs discussion . What is poor? Is having a nokia 6220 poor? Personally i don't have a smartphone, or bluray or sky. Not even an Ipad.
I'm poor!

I am a rfeasonably right wing free marketeer but that does not mean I subscribe to the idea that there are no "poor" people in our society; such an idea is rubbish. That does not mean to say that we don't waste money on welfare, as we all know we do. The problem as always is our rulers.

A pensioner I know just got his annual after tax interest statement for some savings: the savings were one twentieth of the previous year's. Savers have been treated like rubbish for too long. Along with the unemployed, they are paying the price for stupid banks, politicians, regulators, and those who borrowed like there was no tomorrow. It is a complete rip off with, especially with inflation as it is. At this rate those who over-geared against property will be back in the money in real terms within a year or two.

Correction and sorry: should have read "the interest was one twentieth of the previous year's"

What's this got to do with the price of fish ?

Anon. Agreed. There is poverty. Middle class, working class and retired poverty. Universal benefits, like tax credits, were as much about making everyone a little bit dependent on the 'provider', eg Labour, as they were about helping the least well off. But, as well as addicting us to cake it spread a very fat cake very thinly.

JH. Its all behind a paywall, they can write what they like.

EK.Very Good.
But in the Gulf region... Facing shortages and high prices, particularly for shrimp and oysters, other restaurants have substituted ingredients or raised menu prices.

This is the trouble with an inflation figure. To any one person, the figure is meaningless.

I spend a slightly disproportionate amount on wine. To me, the rate of inflation on Bordeaux is about 40% this year. Of course I can substitute Burgundy, or South American wine.
About half that increase is due to exchange rate changes.
My perception of inflation is coloured by personal preferences and not an economists view of substitability. Skiing on Ben Nevis is not the same as Arc 1800.
To someone else that might not be so.

In a strange way I look back to when I was a teenager and remember that clothes were expensive, and almost feel pleased that £2 t shirts will be less available.

As such I would suggest a sensible person should devote a larger share of their attention to the commodity indices - how much a tonne of iron / barrel of oil / baltic dry / etc.

No, this is not the same as real GDP growth.

Andrew B. I dislike those budget reports for the same reason. the Jones family is £2.34 worse off as a result of blah...

So what. Its me I'm worried about.