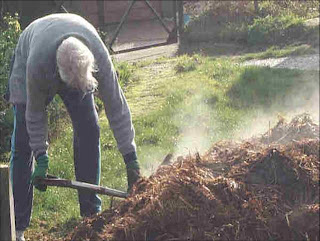 Last week Chris Huhne made the first Annual Energy Statement, and published a slew of other energy docs. It didn't make much of a splash because (a) there wasn't anything really new and (b) it was on the very day Parliament went off for its collective hols. Will he still be in office for the second Annual Statement, I wonder ?

We will be poking around in the small print of these documents over the summer & will report in due course.

We shall however be exercising caution as we poke around, because as well as his love affair with grotesquely uneconomic offshore wind farms**, Huhne evidently has another obsession:

“We want to exploit as much as is economically possible of the 100 million tonnes of manures [and] sewage”.

Ordure, ordure! Well, he is a LibDem …

Email ThisBlogThis!Share to TwitterShare to FacebookShare to Pinterest
Labels: Coalition, Energy and Industry

Love affair! What? He's having another one?

Did someone say manure?

Hoon's venting again. Has no-one told him that the wind doesn't always blow - especially on very cold winter days - just when we need the electricity?

So Cameron says no more transfers to the EU and accepts the EIO almost in the same breath. Meanwhile Huhne wrecks our electricity generation. This follows on from Brown wrecking the bank regulations, the banks and the economy, in that order. What did we do to deserve this?

*including those 'rich' through borrowing.

Huhne is a dangerous idiot. The only reason the country survived the last serious set of electricity shortages - the wondrous "three day week" - was that, unlike today, the entire economy didn't depend upon functioning computers...

If he carries on the way he's going he'll end up doing far more damage to the British economy than the bloody Luftwaffe!