Wonder What This Betokens ...

They've been piling into bonds all right. 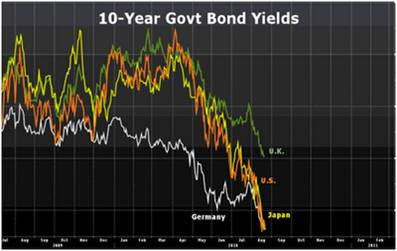 Oo-err. Watch out when everyone gets back from hols ...

Very hard to know what is going on. The raders I know are very worried, but more becauseof volatility than they see something really bad coming. A big drop in the markets, maybe, a big recovery, maybe - just too hard to call.

I am with those who look at this and say yields are not getting any better - when this same thing happened after 2008 the market rocketed- where else does the money go?

If it all goes off the table, which is the other problem, then its great depression part II. This can happen as well as as I can't see Ireland and Greece making it, nor really the US in the medium term.

But what to do? When the recovery does kick in inflation will jump right up too - which is terrible for bonds too.

this is interesting too

Is it really a message when every central bank that can is purchasing 3m, 2yr, 10yr, 30yr, to drive interest rates down to help housing and a few other things?

OTOH, there is a resource war breaking out.

CU, re your link.

"In fact, the tendency of the top 1,000 US stocks to move in the same direction as the overall market – their correlation – hit its highest point since at least 1950 in July, according to Barclays Capital. Correlations between the blue-chip S&P 500 index and the mid-sized S&P 400 reached 98 per cent while the blue-chip and small company indices were 99 per cent correlated over three months; contrast this with Citigroup’s figures showing just 68 and 72 per cent correlation, respectively, over 10 years. The options market is pricing in high levels of future correlation, too."

That's why the old guys who knew about things are all retiring, and at the same time Quants are blowing up.

I keep getting tempted to short them, but I'm scared of Bernanke and King and their printing presses.