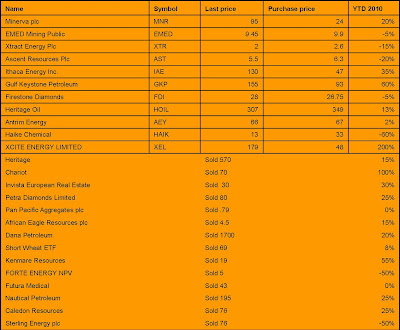 First day back from hols so need to be a bit quick today. So here is a post for those interested in my trading for the year to date. The last six weeks has been very active, disasters with SEY and HAIK were unpleasant; Luckily with HAIK and SEY the investments were only £2.5k each so the big hits were not so bad.

Of some long term pain providers, both Ascent and Xtract have perked up hugely, meanwhile KDD has merged with FDI so I now own a larger diamond producer, not that the performance is anything to get excited about.

In terms of new buys, I have topped up XEL and IAE and bought AEY which is another North Sea explorer, quite a long horizon for that one into end of next year to see real gains, but looks good with a new partner to develop its key field. Also I have bought back into HOIL, I sold much earlier in the year, but the shareprice is languishing and there is lots of good news to come out of Iraq before the year end and it has already performed well in a just a few weeks.

On the downside, missed big moves in both Futura and Nautical, but you can't win em all. Overall up just a tad under 50% for the year, which would hit my conservative aims. However, Mr market is well over bought so I expect a retrace for November before a Santa rally.
Posted by CityUnslicker

Nice work, what you reckon my shirting ultrashort oil and gas etf'sidea?

Yup saw that earlier, not a bad idea. AS you know though I do go in for this old fashioned owning shares thing rather than gambling!

I am holding Ascent Resources, purchased at 4.3p, so I'm up there...

They look decent long term value if you believe in inflation and these currency wars could turn nasty.

I reckon it's time to build up aggressive positions in big guns n big energy and wait for the s**t to hit the fan.

Back from the jungle. My AAAM(African Aura) tip a couple of months back up 60% period of consolidation. In five years they will hit £10(£1.46). Again your Chariot tip has foot on Gas (100% since my purchase)so many thanks.

Inflation is coming.A year or two but its coming.Be prepared.