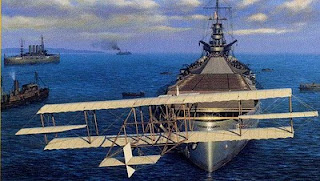 -The carriers will cost 4 billion pounds At least £4 billion as defence procurements have a history of overspend.
The price of the carriers is accepted to have risen to £5.4bn already.

- One report is that the carriers can only use the F-35B Lockheed Martin built in the USA. This is a kind of new generation Harrier part of the joint strike fighter program. But there is a superior F-35C model already under design that won't be able to be used unless modifications to the aircraft carriers are made.
It now appears that one of the carriers will be converted to take catapults enabling them to take the F-35c. Much cheaper and mostly better. {The F-35b is a VTOL design like the Harrier} *Of the 800 supposed orders of F-35 II only 5 have definitely been ordered. 3 by the UK.

And in the many, many comments..Worth reading, as we had little news just the RN's CGI 'artists impression'.
Also to defend the ships the navy has had to order the type-45 destroyer [8, now possibly being reduced to 6] and the astute attack nuclear submarines. Thats an awful lot of shipbuilding. Plus the new, and very late, Nimrod anti-sub plane is needed to defend them too.

- The 6 destroyers and the subs have survived but the Nimrods are cancelled. I don't believe we have any maritime surveillance aircraft at all now.

There is a heavy political lesson for the ConDems here. The coalition is facing the flak for decisions that they had to make, based on the legacy of the previous government.
Very good round up by BBC defence correspondent halfway down the page

There was laughter with Ed Miliband's comment of aircraft carriers without aircraft, which is exactly what HIS OLD Prime Minister ordered, also deliberately signing no-cancellation deals to secure the work for his own voters shipyards. Yet in the media, Cameron's must take the blame.

Aye, these were carriers ordered to defeat the Scots Nats, not the Iranians or Argentinians.

I know Brown has only just gone (just? - it feels like half a century) but it is no good blaming him for Cameron's decisions.

Cameron has ring fenced: the NHS (where vast efficiency savings could be made by at least sacking 75% of the managers); DfID, which should be shut down completely; and the EU, where Cameron has increased EU power (the EIO) and is determined to increase our tax contribution to our enemy. These are his choices, he does not have to make them. He could choose another path but will not, rather than can not.

You mean the one who shot himself 65 years ago?

The coalition is facing the flak for decisions that they had to make, based on the legacy of the previous government.

They are as much in thrall to Brussels as Browne and Blair were. We need to remember that Cameron is Heath's political descendant, not Maggie's.

"The coalition is facing the flak for decisions that they had to make, based on the legacy of the previous government."

Ummm. Don't you perhaps mean mostly the govt before the previous govt?

"it was the Tories who locked the MoD into its insane order for no less than 232 Eurofighters ... The Tories have cost us far more with Eurofighter (£20bn+) than ever Labour did with carriers (£5-6bn)"

And amazingly after complaining about lack of helicopters the last two years, Cameron has cut the current Chinook order from 22 to 12! As Page puts it "cutting our troops' vital lifesaving helicopters in the middle of a desperate, bloody shooting war and pretending it isn't a cut is beyond the pale. It's hard to think of something that Mr Cameron could do to redeem himself on this one."

Stealth, guile, hit-and-run potency for abroad and a land based air force to protect our own interests.

Yes, we are diminished but at least retrenchment will stop any future Labour govts having delusions about invading other people's countries.

...and scrap the aircraft carriers or sell them on once they're built.

Who's going to buy them Kev?