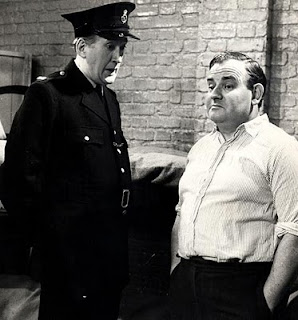 A blue ministerial car is pulling up to the imposing gates at the houses of Parliament. A guard salutes then opens the giant gates. There is a clang of a metal door closing. The clink of solid keys in iron locks..

The voice-over of an old fashioned High Court judge declares..

“David, Stanley, {not} Thatcher, you have been found guilty of failing to achieve an overall majority, and it is now my duty to pass sentence.

You are an habitual politician, who accepts failure as an occupational hazard, and presumably accepts a life in parliament in the same casual manner.

We therefore feel constrained to commit you to the maximum term allowed for these offices — you will form a coalition for five years.”

Scene 1. The Westminster jail cell, home for the next five years to Dave Not-Thatcher. Wearing the typical prisoners issue blue shirt he is putting a few things into his corner cupboard over the sink. A comb. A Montblanc pen. Silver hairbrushes, ipad, tin of snuff..

[enter the prison warden, old Mr BarrowCable. Mr BarrowCable is a very liberal minded warden, not particularly suited to the realities of his office. He much prefers to try and gently persuade or encourage the politicians under his charge. He is the mirror opposite of the harsh disciplinarian, humourless, Scottish, Chief warden Mr McEye who believes, correctly, that kindly Mr BarrowCable is frequently taken advantage of by the prisoners.]

“Now come along Thatcher.. turn off Sky News. Hurry up. I’ve got your new cell mate outside.”

"36.1% of the vote. I overturned a 60 seat majority. I transformed the Toxic Tories into an electable party. Gaw'd help us I even put a bleedin' windmill on me roof and rode about on a yuppie bicycle with a seat that felt like I was sitting on a trowel. Sideways on! I've still got grout marks I 'ave Mr BarrowCable. 'Ave a look ".. complained Not-Thatcher, twisting his buttocks around towards BarrowCable.

BarrowCable made a pained a face and replied, "Oh do stop being so prickly Not-Thatcher. He's a perfectly nice young lad, but he needs some guidance. Seems many in his own party feel he's gone completely off the rails. Turned into a bit of a young hooligan, out in the streets breaking manifesto promises and kicking in previous binding commitments.. he needs someone with some experience. Someone to show him how to get by in politics. Someone to teach him how to U-turn properly. ."

Dave looked unconvinced. He liked having his own cell, own space and own agenda.

"No see, its just not on. I can't share a government with some limp, lentil eating, tree hugging Liberal bed-wetter can I, Mr BarrowCable ?….No offence..”

“Well he is coming in!" exclaimed the warden crossly,but with a hint of triumph. " You should have thought of all this before you backed out of your Lisbon Treaty referendum commitment and ring fenced Foreign aid.. You wouldn’t be in here now would you?" Mr BarrowCable softened his tone and tried to convince Not-Thatcher

"Now come along..He’s only a young lad. First time inside a cabinet. He’ll be nervous. A bit frightened and scared. I shouldn’t wonder that he’s full of highly idealised manifesto pledges and dreams of creating a sense of …well, of fairness, .. a nice fairness throughout the country..He’s like a young visionary Beveridge..”

“And you want me to knock all that naffin' cobblers out of his head?” suggested Dave.

“Oh No , Not-Thatcher. Not that at all. I want you to nurture him. Show him the ropes..let him find his feet in these difficult times..” said Mr BarrowCable imploringly.

“All right then, Mr BarrowClable, all right. I suppose its better than 'avin' Liam Fox in 'ere. Just for you, like. But you’ll owe me. I’ll see what I can do..” replied Dave, sitting down on the prison issue Louis XIV engraved chair.
“‘Ere.” he exclaimed..”.’Ee’s not a nonce is he? A bit of a Laws? I mean, he is a Liberal ain't he. I don’t mind if he is a bit Alan, after all we're all very keen on Faries in the New Blue these days..just that they tend to use a lot of aftershave, know what I mean? Can’t stand all that Henry Cooper splashing about. Not as if I can just open a window is it?….Nah..I don’t mind if he is a bit lukewarm.. just so long as he’s not a bleedin’ socialist all right?. Got to draw the line somewhere. They get right up my nose they do.”

“Right then.. I’ll bring him in..” said BarrowCable, fetching the second prisoner from the landing.

Thumbs up from me BQ.

"You should have thought of all this before you backed out of your Lisbon Treaty referendum commitment and ring fenced Foreign aid.. You wouldn’t be in here now would you?"

Yep. I liked it. I hope we'll see some dream sequences where Not-Thatcher sees how it all might have been if he did not have to keep paying other people with squeezes of toothpaste and twists of snout.

You have to wonder if this graph also shows a similarity to the house values of the turds in westminster, and the bigger turds in the corridors of power who advise them!

Expenses, iffy mortgages, flipping and flipping...you name it, they do it. F*ck the consequences and the voters.

Are they entitled to second cells elsewhere? Weekends out for good behaviour and,er, conjugal visits and stuff?

As always the plot thickens.