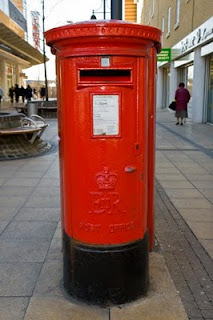 Not very convinced about the government's Post Office scheme. It seems geared to pushing sub offices into small supermarkets. Under current models that is impossible. There isn't the staff in the supermarkets to deal with the work. And the real problem is the work only attracts a pittance so its not cost effective to employ someone to do it.

Meanwhile, Lord Mandelson's old preferred bidder for Royal Mail, Dutch TNT, has seen a 24% fall in profits and is currently embroiled in a dispute with the mail unions. TNT this week described Union demands as "irresponsible, not feasible, and contrary to recognition that TNT Post needs to make major savings". Strikes are likely as the union has demanded that 4,500 redundancies are too many to bear. In Finland the unions ae back to work after a dispute had stopped deliveries. Just in time if the backlog is to be cleared for the Christmas rush. Magyar Posta, Hungary's postal operator is cutting back office jobs to save money. Lithuania post has upped its prices..as will Royal mail by some 10-12%, which is a bit more than usual.

Its all a mess.
There isn't enough money to be made from delivering everything to everyone, everyday, for almost nothing.

Royal mail customers broadly support a 5 day a week service, with some demands on a better service, according to the soon to be scrapped PostComm. Trying to keep the service as it was in the 1980's has meant that RM have shed workers and started delivering later in the day with longer rounds for each postal worker. Not very satisfactory for anyone. Something needs to be done. And someting more than the very lukewarm, almost Blair like style, spin over substance, proposals announced yesterday.

The government is talking bold, but its actions are really just privatisation. No PostBank, and although we here have long said that wouldn't happen, its stil a big blow to making PO viable.
Expect much higher prices and far, far fewer post offices in the near future.
Posted by Bill Quango MP

And as the service goes down, so do we find alternative methods.

Can I have your opinion, BQ ?

I was offered a post office/store on a medium sized estate but not on a main drag (so no passing trade) The house with shop were reasonably priced but I saw the venture as limited in scope. Trade always seemed to be quiet whenever I went in there.

The person recommending it (a family member) was adamant that I should give up my railway job to do it (about ten years ago) and has not really seen my point since.

JH: The alternative methods are a problem. Everyone knows that the railroads, that have to do a similar job,ie take everyone everywhere, cannot be run without subsidy.
The cost of the fixed infrastructure is huge.
Who would set up a system that delivers across the entire UK on an overnight basis, for a fixed, minimal price. Add in the expectations, the unions, the unrealistic pricing {the price of stamps are unaffected by, say, fuel prices. Imagine if milk was the same. It must be available to all at fixed minuscule price, delivered to the door, despite what it costs to produce and deliver.}

Postage prices need to rise an awful lot, or the subsidy {which is pretty paltry - £180 million, barely one days debt interest} must rise dramatically, delivery expectations must be changed OR as used to be the case, the very profitable parts pay for the loss making parts.

EK:Like all business ventures you would ned to se costs and outgoings. But PO, like pubs, have really suffered from regulation and interference. PO used to make money from paying pensions and benefits on behalf of the government. It didn't matter that the government paid only a little for each transaction as there were some 8 million people collecting. Today, after New Labour changes its down to about 1.7million and paid at even lower rate, so much harder. Add in the falling mail volumes, Car tax online, the drain that is the government's crown network and the rise of the online bills/banking and its a tough call whether a profitable business then would be as good now.
But you would still have the premises if freehold. And there are good tax incentives for being a business. There have also been compensated exits from PO which is a lot better than what the pubs got {nothing} and many small business who fail and get zip.

I would think that you can earn at least as much on the trains but as said, would need those books.

The main post office in Frome closed down a couple of years ago and moved into the back of Martins newsagents in the centre of town. Now Martins is closing. So there will be no central post office in Frome. When I expressed shock to the Post Mistress at a smaller post office on the edge of town she said what you said. People pay online for their postage too. All their sources of income have taken a hammering. Frome is not small.

The reason people don't use the post for important stuff any more is because the service is shit.

The poor service offered by the Mail failed to adapt to modern life because of the usual union refusal to allow anything to change ever. As usual the unions are their members' worst enemies because now the whole thing will decay into nothing.

Nobody dares mention the EU.

From UKIP: "But the reality is that EU Directives on Postal Services are unchangeable within the EU and have creamed off the most profitable sectors to private competition ..." ... "... but did not compel member states’ postal services to charge a market price for postage from competitors. This is guaranteed to destroy the Royal Mail and to pave the way for a common Europost service."

BQ - I agree that the PO losing the benefits business is a big blow. Paying that way was better for claimants too as you always knew how much money you had and didn't get stung for bank charges. They should go back to that system. Doubt they will tho.

My recent experience of DHL is that they're crap. CRAP! They pay anyone to deliver letters on a per-item basis, part time. Most unsatisfactory. I'll be sorry to see RM finally die.

Did u see the link i gave in a previous thread to the item you were interested in on my blog, BQ? Tis here.

Lilith: I'm in Somerset myself nowadays and have been to Frome. Its a decent sized town. Many places of this size have only outlying offices now. Interior rents and leases rising as fast as they did in the 1990's.
HMG is about to remove the payment of giros. Seems they are only delaying the announcement to save Vince the embarrassment of having to announce taking work away in the same week he talks of putting more government work through the network.

BE: You're partly right. However secure mail across all carriers is well up, whilst traditional mail is down.
This time of year what is happening is the an untrained student will be given a quick course on sorting mail and will make mistakes.

I saw your post of the letter. Someone postie has put it into an airmail instead of a an inland damaged pouch.
Happens from time to time to us at BQ industries. The pouches are identical apart from the wording. You would think some spark in RM would have brought it up at a meeting somewhere, angling for some Brownie points. They probably did but due to some 'cost efficiency saving' they probably have a million in overstock.

Budgie: We have mentioned the EU side of it all many times. there is a right & wrong presentation to be had on BT, BA & RM. BA was given the airport landing slots that are worth more than uranium.
BT was gifted the lines and could charge competitors and still does, a hefty fee to use them.
One of the other mail carriers can outbid RM on providing a cheap service, collects the easy bits and delivers them, drops off the remaining sacks of 2nd class household mail to RM. Rm delivers them at a loss, charging the other carrier below the cost of delivering them.

All of that insanity came about from deregulation. But it was Mr Blair who insisted it must be done quickly, without the feathering that allowed BA & BT to become the world leading businesses that they were. Other countries decided against doing it our way, or even doing it at all. That finished off RM as a viable company.
Taking the pensions from the PO and refusing them the ability to operate a bank account pushed 85% of the 8 million recipients from PO to the banks, and destroyed them too.

* if you want to additionally EU bash, the competitive 'tendering' process, which means governments cannot just push work through a government network is due to EU anti-competition rules. Ireland went to court over it,and won.

PIP: Seen it..answered at your.

BQ, except the thing which really annoyed me was not the slapdashness of the incorrect pouch but rather the fact that RM destroyed the wedding invitation that I had been sent.

I wouldn't trust them with certain deliveries either !