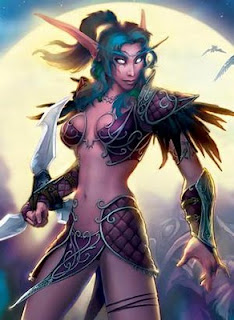 Just to follow on from the argument raging over the BBC's decision to air the panorama FIFA corruption program before the bid, comes another, much smaller controversy.
Next week Panorama is investigating "video games". They are doing a Daily Mail style lament that some kids spend 20 hours playing games and never go outside and so on.

No doubt the best selling World of Warcraft, an online multi-player fantasy game, will be under the spotlight.
USA sales alone showed a profit of $250 million from game sales 2001-9. But that is as nothing to Blizzard's WOW 12 million paying subscribers. It earns about $10/month for each one. There are people online who sell their 'fantasy accounts' to others for tens of thousands of pounds.

Their brand new release World Of Warcraft: Cataclysm launches. on the same day that the Panorama program airs. 6th December.

Is this yet more ratings chasing by the BBC? Will the program find a lonely, unsociable kid from amongst the 12 million who play? Will they condemn 'video games' as the media regularly does with games like GTA IV or Burnout Dominator, or like they used to do with other 'young persons' entertainment such as raves, punk, 'glue sniffing', heavy metal, or Bill Hayley.

I've never played the online game so i don't know its appeal but the BBC.. promises to "reveal the hidden psychological devices in games that are designed to keep us coming back for more".

Panorama reporter Raphael Rowe will "hear from youngsters who've dropped out of school and university to play games for anything up to 21 hours a day" and who "describe their obsessive gaming as an addiction".
The news comes as the BBC pledges a never-before-seen commitment to creating video games of its own, with major licences such as Top Gear and Teletubbies given the interactive treatment.

Its downloadable Doctor Who titles { I think there are 10 or so} were commissioned for a second series in September.
'Addicted to Games?' will air on the hypocritical BBC One on Monday (December 6). Don't feel you have to watch it.

Its funny that that is generally the media's view. A bunch on no hope loners.
But it is only like Facebook Fantasy, or Twitter with spells.

Its entertainment, and social interaction in a different medium.

Boys toys leave me cold....couldn't care less what they spend their money on....it's probably better they sit glued to their computers than vandalise bus shelters or beat up old ladies.

All the way BQ - it is a hort step in BBC land from playing computer games to interfering with children. Only comunity socialistic hobbies are acceptable; only where big brother can se you. The BBC want to be the screens in 1984, always watching you...