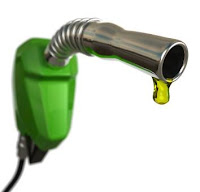 One of the reasons this blog took agin' the Boy Osborne was his soi-disant Fuel Duty Stabiliser scheme, the kind of stupid stunt that Oppositions come up with from time to time, and hope will be forgotten.

But no: it's been remembered, and is now inconveniently back on the agenda - apparently even meriting a mention from Cameron, who probably never bothered to read it properly the first time around. He'll regret it.
Picture the scene.

DC: Hey, Oik, your VAT+Duty double-whammy on petrol is causing a bit of aggro down Witney Way. Didn't we come up with a really neat solution to that a couple of years back ? The Magic Stabiliser, or Painless Petrol Prices or some such ?

GO: Errr, well, we decided not to *ahem* put that in the Manifesto, if you recall ...

DC: But it was one of your clever wheezes - I remember we got a couple of day's good press from that.

GO: But that's what it was for. It was one of my, errr, political wheezes, you know, keep Gordon guessing, fill a couple of boxes on the Grid, put on my serious face and blind the media with a few graphs.

GO: Of course it wouldn't work, you numerically-challenged Etonian git ! - unless you have reason to believe that oil prices will trade in a defined range for the next five years. Even Obama can't fix that sort of thing any more. For pity's sake don't mention it.

GO: Well stick to the bloody cricket. And tell Marr we have back-benchers who are willing to breach his super-injunction using Parliamentary Privilege, if we have to.

I mean, I'm not a big fan of the UK government, but I'd rather they had the money than the other lot(s).

...tell Marr we have back-benchers who are willing to breach his super-injunction using Parliamentary Privilege...

That is the plan isn't it? Someone is going to start talking about excessive super-injunctions. An MP hired by Private Eye?

Gideon are you ready for the fuel strike version 2, people & companies will only take so much, the big city boys will be able to pay for fuel but it puts a strain on lower mortals, the lower paid are required to have a car or some vechicle to get to work because of shift working ( public transport gets a bit patchy after 19.00 ) the lower paid do not get petrol allowance or wear and tear on their cars either. The cost of fuel increases the prices of everything, from transport to heating so inflation WILL rocket.