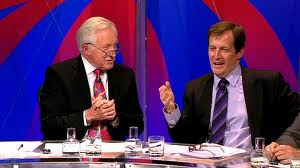 David Dimbleby is joined in Burnley by

Caroline Spelman MP, {Nannygate and rural food minister... or something..}

George Galloway {Broadcaster.Bonkers ex-labour, ex-respect and ex-cat impersonator.. Friend of the Middle East, excluding Israel. Hoping to regain a place at the trough in the upcoming Scottish elections.} Always very reasonable when on QT. Usually a good performer.

and
Clarke Carlisle { Burnley footballer ..? Very religious..aah, I get it now..}
Beeb producers are giggling at their own cleverness this week.

YOU choose what you think the panel may be asked by the audience.
YOU put those guess questions into the comments... points are awarded for accuracy, style, exclusivity, humour and sometimes just randomly.

BQ chooses
1. Big society keeps getting bigger. NHS reform
2. The law says you must allow gays in your B+B but bans fags? Is this right?
3. EMA cost £50 million to deliver the measured £1 million of success it claims. Campbell says its worth it.
4. Chilcot investigation enters its 100th year.
5. Prisoner votes. Now a lot more MPs are in jail, should they welcome them?


1- Did tony blair lie about going to war in iraq?

2 - Will all parents of disabled kids have to resort to mumsnet to get the care they need?

3 -Can the countery afford to pay 6th formers to go to school?

4 -With the new NHS reforms, will GPs be empowered to give everyone a flu vacine if they want one?

5- Is Baronness Warsi correct when she says it's considered acceptable to be prejudiced against muslims?

bonus point for every mention of alastair campbell's new book out?

Welcome back Botogol.
May want to rethink one question...

but not as wrong-footed as these guys

- Alan Johnson was not up to the job, says Alan Johnson.
- Warsi making noise that no one wants to hear.
- student protests shrinking in line with EMA budget
- NHS reform is going to far
- The cost of care for disabled people is too much.

In light of the shadow reshuffle and in the broadest terms:

1. Is Warsi right, Islamphobia everywhere and acceptable?
2. NHS reforms too many, too fast, back door privatisation by evil tories who eat babies dont you know etc.
3. Shadow Cabinet team to beat this vile evil "Tory lead(tm)" coalition
4. AV and boundary changes
5. Inflation - Should the Bank of England raise interest rates? Is it holding off to make profits for evil bankers / or will it do so and make profits for evil bankers.

Where's the league table?
More broken promises! Have you defected to the Lib Dems?

and .. Alan Johnson quits. That is alright says everyone.

final question as they're already recording.

1) Should Dave now dip in his own pocket for a holiday / week off for Riven's Mum?

2) Baroness Warsi - How many Muslims were at this diner party?

3) I've known my doctor for years - will that help me get treatment now that he is in charge?

5) Votes for prisoners - is Dave right to stick it to the EU, what will it cost us, maybe it's worth it?

Should strikes and other damaging action by public sector workers be the subject of a special regime?

Has the British Constitution evolved to the point where the most powerful member of the Executive is the Chancellor of the Exchequer?

What pressures has Alan Johnson been placed under to cause his resignation, and from whom?

Is it authoritarian to ask primary school children to learn their number bonds?

The answers 'richman', and 'this time' having come up, should Miss Middleton go to the Abbey in cab, coach, wheelbarrow or dustcart, and dressed in silk, satin, cotton or rags?

1. Should Mr Quango's pay be frozen for 2 years ?
2. Those undercover cops - are there any ACPO agents provocateurs in the audience ?
3. Should the coalition heed NHS vested interests & back-track on reform ?
4. Those Muslims - thin-skinned or what ?
5. That Ricky Gervais - w****r, or what ?

Dimbleby says..
1. Ed Balls strengthens or weakens Red Ed? Classic comment out of Cambell's diary. Two plugs for his book already. Ali C does a massive U-turn over Balls, who he now says is not a dribbling imbecile but a great leader. And with a straight face too! He's still got it!
S.Hughes points out the Balls problem. The debt is owned by him.
GG, good Granita line. Spoils it by bigging up Balls and deficit denying.
CC,goes both ways..but gets big applause.

Goldsmith/Chilcot question
{If you have I-player watch this clip. Ali-C coughs very loudly to disrupt Galloway's flowery rhetoric and to draw the camera too Ali-C, to record him shacking his head in disagreement. Clever stuff. Working the medium.}
Long answer from Cambell. Not very convincing though. SH is more believable.

NHS reforms
CC admits he doesn't know. Quite right. Who does? He's quite good at putting questions into a 'team - boss - leadership context.
AC talks crap.Spellman is quite good, but is talking to the won't be converted.
SH absolubtely nails what should be the government's argument. Take the administrators out of the NHS and have 2x the funding for doctors..nurses..kidney machines.
Galloway blathers..

20% youth unemployment and EMA Ali-c says he loves the EMA. I knew he would. SH in a dilemma..he supports it too.
CC likes EMA but not that most get it.Spellman mentions better targeting.

Old and Sad. The Mark Twain question. Did anyone get this one? Was a long shot but possible.

Hovis 2 +.5 fot the Tory-led{TM} gag and .5 for getting Tory privatisation of the NHS. Is Burnley a major healthcare employer? Certainly seemed to be.

Hatfield Girl = 2. No Middleton this week.

I have to say CC seemed to me like a terrible idea to me - and he stated slowly, but over the full 60 minutes ... the boy done well. I especially liked the way he linked NHS reforms to getting enough flu jabs :-)

the pro-state, anti-enterprise mindset displayed by the audience was quite truly frightening.