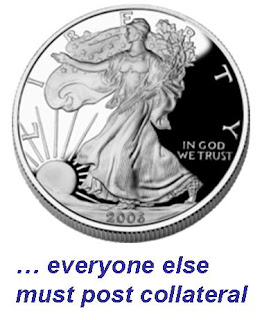 Comments following Tuesday's post on silver focused on my preference for investing in the actual physical stuff. I replied in the comments on 2 risk aspects, and for completeness I thought I'd summarise my views on some of the range of risk issues involved, as bullion neatly illustrates quite a few. For avoidance of doubt, these are strictly generic and academic 'Risk 1.01' views that you'll find in any (good) textbook ...

1. Price risk: pretty obviously, investing in bullion represents outright speculation, with all the attendant exposure (unless it is part of a hedged strategy). I often describe gold etc as a 'hedge against Bad News', but that should be seen for what it is - a very loose use of the word 'hedge'. There is no precise inverse correlation of the sort that true hedging implies: it's a 'dirty hedge' at best.

2. Basis risk: investors wanting exposure to (say) the gold price, but not knowing how to get direct exposure, have often bought (e.g.) gold mining stocks as a proxy. Only empirical analysis can determine how closely the prices of gold and mining stocks are correlated (answer - not very highly, by risk-management standards): and even if two things have been very well-correlated for a long period, this correlation might subsequently collapse - I could cite many cases. This is an example of what is known in the trade as Basis Risk.

3. FX risk: if something is denominated in a currency other than your own, this can open up another source of risk. Of course, gold, though generally quoted in USD is readily quoted in all currencies, and anyway FX itself is an ultra-liquid market; so is gold 'really' denominated in USD? An interesting question, not easily answered. But we could fairly say that oil is definitely denominated in $, FX notwithstanding, because its price formation is driven inter alia by the dollar itself.

4. Credit risk: when you want to cash out, can you ? and with what certainty ? This is where serious DD really counts, & it leads directly to some other risk considerations ...

5. 'Wrong-way' risk: where the credit standing of your counterparty is related to the very economic conditions your investment is concerned with. If you buy an out-of-the-money put from an oil company, you'll be wanting to exercise it when oil prices crash. But that's just when the oil company will be in trouble ... The same might be true of (e.g.) an ETF, relative to Bad News - Alphaville has published long articles on this.

6. Illiquidity: at the best of times, some markets / asset classes are more liquid than others, & in troubled times this can become acute. Bid-offer spreads can become ugly, too. The latter can also result from volatility which of itself, for the trader, is not always a bad thing in terms of opportunities presented. But wide bid-offers only favour market-makers.

7. Premium on physical: this is where we came in. For several of the above reasons, commodity buyers (both private investors and industrial end-users) prefer owning the actual stuff, even if (on a good day) paper 'equivalents' have a near-identical financial performance. Of course, owning the actual stuff often comes with additional costs and complexities of its own - who can handle 1,000 tonnes of coal, or 1 MWh of electricity ? Typically, only a specialist player.

But it also comes with a greater measure of certainty, which in difficult times can be a serious advantage. Related to what is termed the 'convenience yield', it can frequently outweigh the 'cost of carry', amounting to a premium on holding the actual, physical commodity - particularly when credit issues abound, and there is reason to be suspicious of contractual performance.

Sound familiar ? Back to doing your own DD, chaps.

PHAG ETF Physical Silver should be ok on the basis of most of what you write. Which is very insightful ND.

The government might change the law regarding the silver you hold or the gains you make on it.

Isn't the physical metal only useful in a full system, economy or monetary crash? - i.e. you would be using it as a real medium of exchange.

To actually BUY stuff with it (gold/silver) surely very small pieces of gold are needed - you would want it in 1 gram pieces (around £30.00 each)! Silver appears much more practical at Circa £20 per ounce - something a barter-partner can actually "feel" some weight in. Of course in a breakdown situation is is likely to be thieved or taken off you by force once the word goes round that you have some:(

What do you mean owning the physical?
actually having it delivered to your house and storing it in a safe under the bed?


Do you mind if I ask you guys a question.
I tried to apply for a Share Dealing ISA from Lloyds, advice from a friend.
Anyway, they sent me an addessed envelope and want me to send them my passport or drivers license! through the post. Not a copy the real one.
Sounds crazy to me, how can this be secure.
Is this the same across the board or are there better alternatives?

@Anon
"What do you mean owning the physical?
actually having it delivered to your house and storing it in a safe under the bed?"

Err.. yes as in physical, stuff you can hold in your hand, you know, trade with your neighbour for 6 onions (a bit discoloured) or 3 (out of date) cans of Guinness :)

You sound surprised, what's better - 6 virtual onions, held in a Crest v.onion.com account or 6 onions you can eat if you have to?

You will also need a tin hat :)

Yes, I didn't know if it also ment owning a silver allocation with your name on it in a vault somewhere.
as opposed to etf.

Surely you couldn't store large qualities of silver at home? isn't that a huge security risk? This guy Nick Drew must be a member of the SAS!

As you saw in the recent rush on silver, it's not a level playing field, Nick. Now if you're happy to trade in a stacked game, you're a brave man.

anon - some obviously like coins etc, with visions (like Timbo says) of the midnight flit, or trading for what some call the ultimate commodity - calories - on a dark future day

in my case, despite (or perhaps because of) my military background it's the allocated stuff in a vault: I see the distinct possibility of Bad News, but not quite that bad

(I might add that in 2008 an American chum of mine actually turned up in Switzerland to take delivery in person ! - having determined that the tax implications of 'shipment' to the US were prohibitive: it would have involved sale & re-purchase)

as regards sending passports, all I can say is that for my UK account the same was required (except like you I was queasy about the post so I turned up in person) - but not for my US account. Just another example of how much more customer-friendly US brokers are

James - I agree with what you say. But IMHO equities are worse ! More generally, what game isn't stacked these days ?

You are relying on the vault to honour your purchase, maybe if Western society really collapsed they would tell you they had run out, even if they had not, just because they wanted to keep it.

I know you don't believe the collapse will be that bad, but clearly when we stop living beyond our means theres going to be a huge rebalancing.

I think it will be pretty bad.

@Anon, The problem I have is that I don't know how bad it will/would be I have some faith that TPTB will manage to keep things on track - if only for their own benefit.

What I am fairly certain of is that if it did ALL go nipples to the ceiling - then it would be swift, very swift (one-two-three weeks max.). But would recover reasonable quickly too. So strategy is not "Survivalist" only short-term "make do" for say 3 months. If there no recovery of basic civilisation - power/fuel systems + money systems & banks + Food distribution or supermarkets to name a few - by that time, then it's curtains for millions maybe billions of people. There are not the space/resources/systems for 7 billion of us all to survive in a low tech neo-medieval world. Just not going to happen.

IF it happened and I & Mrs. Timbo (Important point! we've been together over 40 years since we were 14 & 15) survived that long my expectations from life would have radically changed and I would have to "wing it" from there on. Being able to "make do" as Brits do for those few months is the furthest ahead that you can have standby-plan for....