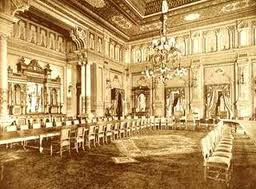 Amongst the subjects discussed in the friendliest PMQs in history was 'What are we going to about Egypt?'

Warning: Obscure History post.
Egypt is in Britain's Imperial past. Since sinking Napoleon's fleet in 1798 and then building the Suez Canal in the 1850's the British have ruled in the desert. Isma'il Pasha The Khedive of Egypt borrowed huge sums from Britain and France, and when he couldn't pay them, Britain got the Suez canal. Later the French ran out of cash fighting the Germans, so Britain took over completely the whole of the Suez canal zone, and , effectively, Egypt and Sudan. Lord Cromer was the most famous administrator.

He ruled on and off as consul General from 1887 until 1907. Charged with sorting Egypt's chaotic finances {the country was way beyond bankruptcy} Lord Cromer , formerly Eveyln Baring of a certain famous banking family, put the country on its soundest financial footing for probably a 1000 years. Egypt, still nominally part Ottoman Empire was really ruled by the British. That Suez control agreement allowed Britain to keep military forces in the country to protect the canal. And Britain kept plenty of forces in this most strategic of strategic regions.

Lord Cromer fixed the economy, but only by working exclusively with the ruling elite and shutting everyone else out. This caused great resentment and led directly to the growth of Egyptian nationalism. When WW1 broke out in 1914, Turkey was on the wrong side, and Egypt becomes completely taken over by the British Empire. Not as a colony, but a protectorate.
{It had long been such, but never openly admitted to.} In 1918, Britain decides against giving Egypt independence, locks up anyone calling for such, and carries on.

Situation got very tense. Eventually in 1922, The British Empire agreed to an independent Egypt, with its own government and King, and promised to leave very soon, as soon as the situation stabilised.. Britain to remain in control of the canal, and really, the entire country, and although promising to move out almost every week never does. In 1936 the situation is formalised when Britain agrees to leave by 1950.

When war breaks out, the British in the middle east are in a neutral country, with Italian enemies on the borders. Axis success with Rommel leave the German and Italian armies at the gates of Cairo, with the British army defeated yet again and in full retreat.
The British ambassador, noticing that a large number of swastikas are appearing on the balconies of Egyptian slums decides that its time for a change of ruler..

The British army surrounded the Abdeen palace {photo is of dining room }of the very unpopular king Farouk. The King lived a Hollywood, playboy lifestyle and was despised by Egyptians and his British masters.
Ambassador Lampson pretty much took it on himself, whilst reminding the king that Britain was fighting for democracy, to insist the king either dismiss his government and sack his Prime Minister and appoint a new one, 'the Wafd party' of Lampson's choosing. Or abdicate immediately so that his heir could carry out the instructions, or get shot accidentally.

The miserable 'fatty' Farouk, as he was called by commonwealth troops in every bar and brothel in Cairo, dumped the government, for the Wafd, which Lampson thought much more pro-British. A major incident, a coup in a neutral country, passed off without too much bloodshed, apart from the usual settling of scores as the new ruling party took revenge on the old.

However.. The effect on the people of Egypt was dramatic. There was an enourmous amount of sympathy for King Farouk and his humiliation by the British. Instead of a joke figure he was a hero. The Egyptian military was particularly incensed and a groundswell of nationalism
took hold that remains to this day.

Eventually Farouk and the Wafd party lost support whilst the military gained, resulting in the officer's coup of 1952 led by Gamal Nasser of the Egyptian military, that forced Britain out of Egypt.
'We were leaving anyway,' the British said...before trying to get back in with a truly illegal war that totally failed when America said it would call in all debts if UK and France didn't get out immediately. In gratitude for saving his country Nasser made a speech about how American had sent 200 jets to bomb the Abdeen place with him in it.
This story was believed across the Arab world despite the fact there were no American planes or carriers in the Middle east and America was incensed by the invasion and brokered the peace.
It was believed because America had backed Israel in the 1948 war, which Egypt had humiliatingly lost.

So what should we do about Egypt?

Interesting piece. The asia times has run some thought provoking articles on Egypt. Looks like Chinese demand for wheat is locking the middle east poor out of the wheat market. Expect many revolutions for years to come.

"promises to leave very soon, as soon as the situation stabilises... and although promising to move out almost every week never does"

This sounds awfully familiar. Can't quite put my finger on why.

@Anonymous - interesting especially when you remember Egypt was the bread basket of the Roman empire.

We are going berserk at a 30p rise to a loaf. Imagine if it rose beyond our ability to pay for it. Imagine if a mother's pride rose in price by £9.50 and your wages hadn't increased to pay for it.
Revolution indeed.

BE: Our Iraqi adventure was not illegal.

Incorrect premise - yes
Mis-sold..Yes.
Unwise..definitely, but we had a UN fig leaf backing, previous UN resolutions and a cause that could make a case for war.

Suez, on the other hand, was a completely illegal war where we fabricated the evidence for the invasion. Then we secretly agreed with Israel that they could invade,we would step in and 'drive them back', and take over the country for ourselves to protect them in a ploy worthy of the old USSR.

It fooled no-one and achieved the exact opposite of the UK government's intentions..

Which unfortunately means you'll be ignored and we'll do precisely the opposite.

But lets not pretend the USA had Egypts best interest at heart.
The USA at the time had a policy of ending what was left of the British empire and were only too happy to see Britain in a mess.
And didn't want us controlling Suez.

Since those times, America has been responsible for supporting and proping up some of the most unpopular figures in the region.
I find it extreme hypocrisy that Americans today are claiming to be standing with the people against the govenment that they have bankrolled for years.

Agree that we should not interfere. But at the same time, other countries should stop interfering with Britain.

America didn't do much supporting in 1948. But American Jews did raise millions of dollars, which was spent (mostly in Czechoslovakia, although some in the States) on arms, starting in the days of the british Mandate with 10,000 rifles and 450 machine guns. They then started buying field guns and ME109s from the Czechs, flying them via Corsica until the Septics put pressure on the French to stop them - at which point they switched to Yugoslav airfields.

The Czechs sold to all sides. One cargo of 8,000 rifles destined for Syria on the shop 'Lino' was sunk by a Haganah limpet mine in Bari. When the cargo was salvaged and reloaded onto the Argiro/Algiro, the ship was hijacked off the Dodecanese and the arms seized by the Israelis.