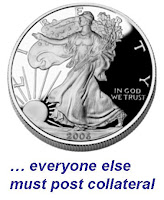 For those many of you who view the bullion markets with skepticism or condescension, I have to say you are missing something, if only as a spectator sport.

I can't begin to summarise the goings-on: suffice to say that all hell is breaking loose in silver, which is up 7% this week, and nearly 20% since the end of Jan. FWIIW, I am still long, but could envisage some profit-taking soon.

But that's not really the point - it's the backstory. If you are prepared to suspend disbelief for a quiet hour's reading, I direct you to this bravura blog, and a conspiratorial Yahoo thread.

Knuew I shouldn't have closed that position the other week.

wv: tosings - believe it or not.

wv is persistently the drollest aspect of the interweb; I have lost count

Don't forget Jesse on silver too.

You ain't seen nuthin' yet.

Dips will b bought

I think that there is a good chance that silver will pull back to the low 20s and maybe even below by this summer.

I've been long silver since below $10 and would't sell my physical yet as the future looks very promising for the metals but short term I am beginning to take all profits from my paper holdings.