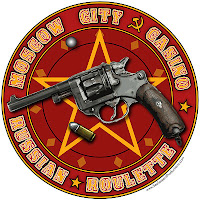 Amongst a very busy week news wise there has not been too much notice taken of BP's latest Russian calamity. The Billionaires of TNK-BP have succeeded in a Swedish Court in having the proposed BP-Rosneft deal.

Now Nick Drew and I have dinner bet on what happens with BP. Mr Drew says that the new CEO, Bob Dudley, having been forced out of Russia by TNK a couple years ago, will understand the politics. I on the other hand think the Russian ins Russia know between themselves how to get a Western Company just where they want it.

My thoughts on what happens next are:

1. TNK manage to get a lump of Money out of BP.
2. Rosneft somehow gets to take over TNK as a result of Russian 'intrigue' - possibly by being 'attacked' for thwarting BP
3. BP proclaims happiness with the situation; but in reality has lost control of half its Russian assets in return for a 5% share in Rosneft. Rosneft will now how all the cards in terms of revenue, and BP will get used just for its exploration skills.

The idea that Putin backed Rosneft and TNK-BP being on opposing sides of the table is laughable. The table in Russia has all Russian companies on one side, with the Government and foreigners in the other. It's a very loaded game indeed and I don't hink that as smart as BP are they have the right smarts to deal at this level. There is a good reason the yanks, French and other stay well clear of trying to do 'business' in Russia.

We will see how it develops, but I am glad I am not a BP shareholder.

Finally, for a great read and insight into Modern Russia see this excellent article, its funny and very well written.
Posted by CityUnslicker

have to admit it's not looking too clever, but the fat lady has yet to clear her throat

BTW Rothschilds are advising BP on this one, and some other strokes they intend to pull, watch this space

(that's a simple statement of fact, though if you like conspiracy theories - and I know you do, as Andrew Neil would say - you can google BP - Rothschild - conspiracy and away you go !)

The idea that Putin backed Rosneft and TNK-BP being on opposing sides of the table is laughable. The table in Russia has all Russian companies on one side, with the Government and foreigners in the other.

Ain't no doubt about it.