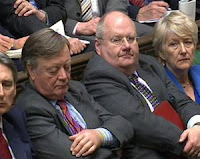 Too good to let languish in the comments

Pyjamas in the House

Thanks for the compliment BQ

It just popped into my head, almost complete, just as I was going to sleep... I had to damn well get up and write it down!

"What a fine poem. A worthy winner. I've always imagined Ken in a nightshirt holding a flickering candle, BQ. You know he must be having too many fine dinners with benchers."

It was a shame that the camera cut back to Osborne.
If it has lingered a little longer you'd have seen my hand hand slip inside his jacket pocket and remove a 1/2 bottle of House of Commons Whisky.
Keeping it 'safe' for him.

You're right Measured. He does look like he wears night attire from the M+S Christmas Carol collection.

Nice article, thanks for the information.

Leave the old lad alone, after all Ronald Reagan fell asleep in important meetings, also Ken Boy was sat next to Fatty Pickles but how he fell asleep next to a man who takes 2 seats I don't know he seems quite comfortable though (Ken).

Ken in a nightshirt holding a flickering candle

Don't give me nightmares.

Thanks for the blog loaded with so many information. Stopping by your blog helped me to get what I was looking for.find it here:
http://www.lulworthcastle.co.uk |

This is the first time I visited this blog. Really this is awesome work with the blog.
00k.biz |

Thanks for the information! Now I know what i will do the next time i travel. Looking forward to go to Thailand later this year! Thanks for some pointers!
http://www.istechnology.org |

Hello there, I discovered your website by way of Google whilst looking for a similar topic, your site came up, it appears great. I’ve bookmarked it in my google bookmarks.
www.premfood24.com |

Hello there, I discovered your website by way of Google whilst looking for a similar topic, your site came up, it appears great. I’ve bookmarked it in my google bookmarks.
www.premfood24.com |