Libya .. not much time left. 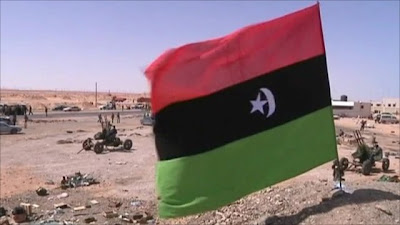 Libyan rebels in Ras Lanuf. I emailed a USA friend earlier about the rebels preparations.

The question I asked was based on some BBC reports from Ras Lanuf. Those AA guns there were moved close together and were then surrounded by 4x4s parked all around them. I asked thea retired US Army general if the deployment of those guns was as bad as it looked to me. Parked close together, surrounded by hundreds of boxes of ammo, with civilians milling about, firing the odd burst into the sky for morale. I could see no proper defences at all.

"Defense of AA guns is not so much a "surround by infantry and let them do their job" so much as they are support weapons for the front line troops protecting the airspace dimension. AA guns should be integrated and provide supporting fire for each other with overlapping arcs of fire to maximize potential against aircraft.

The guns are too close and could probably be taken out with one strike. Normally you would want a couple hundred meters separating them to limit damage from artillery fire or one strike taking them out. Normally you would have a chest high sand berm in a u-shape with the open end to the rear to protect from shrapnel and small arms.

As for deployment, what purpose are the guns serving in this location? Is it a strategic crossroads or a likely air avenue of approach? If so placing them for best fire position is paramount. Based upon what I have seen on the news, most weapons have been placed haphazardly and if the Libyan forces were competent the rebels could be easily overrun by a coordinated combined arms assault.

In the hours that I was waiting for this reply the news of the rebels being defeated and falling back from concentrated Gaddafi regime attacks came in. The rebels just aren't trained. They have no air power. They don't appear to have much artillery. And despite everyone in Libya undergoing conscription, they don't seem to have much experience.

I expect that those SAS troops were secretly supposed to be military 'advisers.' If the rebels don't get help very soon, I'm sure they will lose. Ras Lanuf is 2/3 of the way from Tripoli to Benghazi.

Email ThisBlogThis!Share to TwitterShare to FacebookShare to Pinterest
Labels: Libya

I just asked a similar one and I think we all are. The simple truth is that Cameron is committed to them failing. No one in the governing class can afford people power because it is unable to be controlled and directed.

There is a major push on, globally, to reduce the common man to penury and control and Libyan people power does not sit with that at all. We encouraged the masses to rebel but only to topple Gaddafi, nothing further than that.

There is some suspicion that the SAS were on a different gig to that which has been reported. Hmm...dunno.

JH: Not sure its deliberate strategy to keep tyrants in power so much as inability to do anything about it.
CU posted already of the strong Russian/China interests i Libya. They voted down the UN. America is too scared to get involved in another war while its trying to get out of its current ones.

UK and France would like to help, but not invade and get sucked in. I think they;'re thinking of a sort of pre Iraq-2 strategy where Saddam's planes were being shot down if the dared take off.

Now that all the talk of help is over, Gaddafi has fired up his T-55s and aging Migs and committed them to the offensive.

By reports from the Gulfwar indicate even a single troop of M1A1 Abrhams or even our own Challenger IIs with air support could probably stop the whole lot of Gaddafi's forces and liberate the country.

Of course, what would they do with it then? That's the problem.

DP: Always a thin line between "Security prevents the truth from coming out, but it was a brilliant, if risky plan ,..." and a straightforward cock-up.

What I find interesting is the deafening silence from all those opponents of the Iraq and Afghanistan adventures. It would be nice if they would let us know what THEY think the govt should be doing.....clearly Cam is not gonna dive in this time, so perhaps he will get kudos from the left for his stance(and then again maybe not...)

I feel for the rebels, they don't look like having a vrey nice future. Saif et al are sadistic bastards....

Was it an assassination squad??