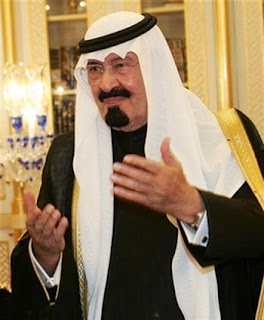 With the situation in the MENA region being so unstable, it is hard to make predictions about the political outcomes of the near future in the region.

Plenty of people are writing that Saudi Arabia will be fine because there is so much money around to spray on the locals that they won't kick up a fuss.  I have a theory that this is not going to work in the medium term and perhaps not even in the short term.

However, this ignores the key drivers of human behaviour. the key one is the search of self-worth and self-esteem. In Capitalist societies the accretion of money does mainly achieve these ends for most people; so the work ethic pays.

In societies which are not capitalistic, like Saudi Arabia, the dynamics are different. The population is given money and does not want to work for low wages (an extreme form of the UK benefits trap); also because they have money anyway it does not generate self-worth relative to others. So people look for other avenues, politics is denied to them by the state too. One such route is religion and seeking solace from the next life. Unsurprisingly Saudi Arab is is the home of some of the worst Islamic extremists including Osama Bin Laden. Perhaps the saying is true, that the devil makes work for idle hands?

The upshot of the above is that it is not the lack of money that causes problems in Saudi, it is the lack of opportunity. Dubai has at least in economic terms tried to build a non oil economy. This has been de-railed somewhat by the Financial crisis, but it is a start. Many other OPEC countries, Iran included, just don't bother as the structural issue caused by the high level of social payments is too hard to overcome.

What the Saudi's should do is promise to build a real economy, with real, non-oil jobs for people to do; look to China for a model if you don;t want the democratic element or to Dubai. It can be done, but the capitalist economy of work and production is the way forward - not handing out subsidies.

Of course, when you are an  extended ruling family that inherited all your wealth coming to this realisation is not going to be easy unfortunately.
Posted by CityUnslicker

Surely the main thing for the gulf states is to stop boat loads of small arms being shipped into Yemen.

It's only if the population becomes armed you're going to see any real regime change.

I suggest that "self actualisation" as defined by Maslow, is a better handle on what you are saying.

Pretty difficult for a country to get from here to there without some major disruption. Will a disruption be the cause or the effect or both?

Let's say that two thirds of the population are pretty comfortable with receiving a nice income doing a non-job paid for by the Royal family and most of the rest of the remaining third have industrial and service jobs which indirectly depend on those richer two-thirds. There are a hell of a lot of vested interests against substantial reform even if the longer term outcome is preferable.

"the key one is the search of self-worth and self-esteem. In Capitalist societies the accretion of money does mainly achieve these ends for most people; so the work ethic pays."

Not sure. I don't see too much self-worth on the Northern Line at 8.30 in the morning, though I have no doubt that my fellow-commuters are making good money, or at least much better than the population at large.

SL - Not sure I agree, how would you explain Egypt?

BE - vested interests of course, we are seeing that in Libya. I have no handle on the proportions though. My limited understanding of Saudi is it is the extended Saud family that really benefits and this is tens of thousands, not millions.

Anon, welcome. The concept is the pursuit of betterment and a role in society. those who are out of the house at 8.30 certainly have a role at least; whether they like it or not is a different matter. the comparison to be made is to the unemployed and unempowered in Arabia.

Simple - no regime change in Egypt, just a change of personnel - i.e. Mubarek

SL - ah, well let's see. I think they will have elections this year at least and already they have freedom of speech - so quite big changes. not so great if you hold CEY shares which luckily I don't!

SL - ah, well let's see. I think they will have elections this year at least and already they have freedom of speech - so quite big changes. not so great if you hold CEY shares which luckily I don't!

It's certainly interesting times. I guess things get a bit theoretically blurred when we talking about humungous wealth, humungous. I'm of the opinion that the Good Friday accord has only been successful so far because of the £100 billion chucked in behind it. Are they high class whores I guess is my question? Hmmm...I reckon they probably are.

Can you see them doing that while there's the oil?

But the official unemployment rate in Saudi is only 10% (est 2010), which isn't that bad. Women cannot claim unemployment which would push the rate to 25%, but as Saudi is still rather backwards on woman's rights then its likely the majority of women will be home makers rather than job seekers.

Saudi has committed to reducing energy consumption by 30%(?), mainly by better insulation on housing which will create plenty of jobs in the short/medium term.

Saudi is also embarking on a large Nuclear program, its unclear how many jobs that would create (beyond construction) as their reactors may be managed (US?Russia?China?).

I thought Saudi's long term problems were water (high energy inputs), food imports (which would need exports to balance the books) and replacement industries for when the oil goes.

BE makes a good point about non-jobs, maintaining luxurious palaces etc. Without oil money a lot of non-jobs would disappear.

"BE makes a good point"

Thanks Alan, I may have to print this thread out for posterity!

You have just described Brunei perfectly. The only difference is that, unlike Saudi, the Sultan of Brunei does not allow in hundreds of thousands of foreigners so the local populace can go about their daily chores unhindered.

CU, Egypt has experienced a military take over. And why was this? Because Mubarak's son & heir apparent was busy introducing market reforms which would ultimately destroy the power & vested interests of the army elite. Sure, "the people" enjoyed the demos in the streets - largely after the army made clear it would not stop them. If they had wanted to, the demos would never have got off the ground.

Sadly the mainstream media are too stupid to understand this.

"However, this ignores the key drivers of human behaviour. the key one is the search of self-worth and self-esteem. In Capitalist societies the accretion of money does mainly achieve these ends for most people; so the work ethic pays. "

1. In many societies group-worth and group-esteem eclipse self-worth and self-esteem. Even in the London Docklands, the minds of the well-paid are manipulated by their bosses by playing on their team spirit while indulging their delusion that they are individuals.

3. The work ethic is not related to payment. Mother Theresa types have a huge work ethic and took little payment in money.

The post was speculative but nonetheless interesting if considered as one of a possible set of speculations.