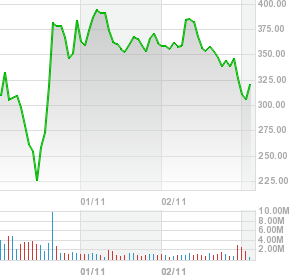 A quick post on a current trading opportunity. XEL.L (Xcite Energy) is a small North Sea oil explorer which I have covered before in trading posts. This last week has seen a very over-done sell-off after some news from the company.

In short, the Company has proved up a huge new heavy oil field in the North Sea and is completing a technical report to turn this find into 'proven' reserves. That will then allow it to raise the finance to develop the field. The size of the find is likely to be between 170mn and 250mn barrels of oil.

This week the company said the report was complex and important and instead of being ready in mid-Feb to early march it will be ready at the end of March. Now, AIM being tradersville, this has caused a 25% sell-off in the shareprice. Yet there is the prospect of a material upgrade in just a few weeks time. It is a great opportunity. As it happens today looks like the end of the major selling phase has come to pass and there will be a small push up. Perhaps tomorrow will confirm whether this is a bump or not. Either way the share could go as high as 600p on the news but is more likely to get stuck in the mid-400 - still 50% from today's prices.

Noticed this on my 'holes in the ground' watchlist on my cfd account.

You think that's it then, the sell off is done and this is the entry point?

3 weeks until news, event dear boy - one can never be sure. The bear raid has ended for now though by the looks of the trading.

I have a question if I may. I've been looking at a few different self-select ISA brokers and wondered if you had any thoughts on the different providers. I've looked at Hargreaves Lansdown and TD Waterhouse amongst others but didn't want to just focus on price.

I use III Matt and am quite happy, low costs and good service. Both the two you suggest are good enough - main advise is to avoid big banks like barclays, hsbc etc - their services are expensive and rubbish.

TDW have lower dealing costs than H-L. Other than that there's not much to choose between them. I use TDW for my ISA and my normal portfolio and H-L for the SIPP.

Anon - they are indeed - but as a subsidiary - the costs are much lower - barc and hsbc are just terrible!