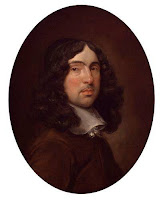 As behoves a metaphysical, Mr Marvell's work is timeless.

Had we but cash enough, and time,
To print our names would be a crime;
Our lawyers would devise a way
To keep the media at bay.
Super-injunctions fit the bill
When we’ve embarrassments to kill.
For, Lady, you deserve a break
(And I’d be free to play the rake).

But at my back I clearly hear
That bastard Hislop hurrying near;
And yonder all before us lie
Deserts of vast ignominy.
Your reputation turned to dust;
Revealed to Ashley, all my lust.
The Beeb’s a fine and private place,
But Private Eye is on my case.

So now, before our cover’s blown
Let’s claim the high ground for our own.
“I would not gag a fellow hack -
I wished to spare the lovely Jack !
Surely a man and family
May have a little privacy ?”
Thus, though we cannot thwart the Sun
We’ll still look out for Number One.

Email ThisBlogThis!Share to TwitterShare to FacebookShare to Pinterest
Labels: doggerel, Media in the dock

Very well put. Claiming the moral high ground for his own - under threat of further, impossibly high, legal costs.

Very good.
Dare we repeat the twitter jokes of yesterday?

Bill, I think you should ! (since I missed them, not being 'on twitter' or whatever one says)

"Imogen Thomas, Ryan Giggs, Ewan Mcgregor and Gaby Logan walk into a bar and I can't tell you what happened"

Can't name the first person who scored away from home.

Indeed! And what a fine poem to start from. The boy Marvell done good, especially in this, the vegetable green of the year.

Unknown said...
This comment has been removed by the author.
7:10 pm

I messed up badly with previous comments so had to delete. Try this.

mouth is one order of magnitude wider

ND, I did the thin version. His face is wide but he is skinny at the same time so I had to compromise somewhere.