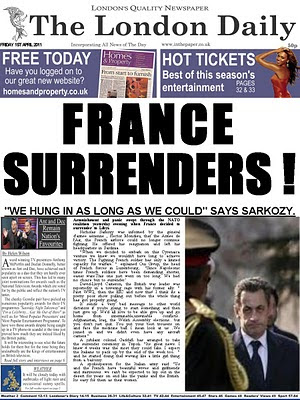 Astonishment and panic swept through the NATO coalition yesterday evening when France decided to surrender to Libya.
Nicholas Sarkozy was informed by the Général d'armée aérienne, Hector Mondieu, that the Armée de l'Air, the French airforce could no longer continue fighting.
He offered his resignation and then left his headquarters in Sardinia.

"When we decided to embark on this Cyrenaica venture we knew we wouldn't have long to achieve victory. The Fighting French soldier has only a limited capacity for warfare." explained Oui Givup, the head of French forces in Luxembourg.. "Since Napoleonic times French soldiers have been demanding shorter,easier wars. This one just went on too long. We had no choice but to surrender."

David-Lloyd Cameron, the British war leader was reportedly in a towering rage with his former ally.
" First WW2, then the EEC and now this! I think its a pretty poor show pulling out before the whole thing has got properly going.
It sends a very bad message to other world dictators if you're going to start something and then just give up. We'd all love to be able give up and go home from interminable,unwinable conflicts.. Afghanistan, Iraq, the Welsh Assembly elections.. but you don't just quit. You put your best trousers on and face the medicine ball. I mean look at us ..We joined in and we didn't even have any aircraft carriers or any proper kit at all.."

A jubilant colonel Gaddafi has arranged to take the surrender ceremony in Tripoli. "Its great news. I knew four weeks was the most they could take. I expect the Italians to pack up by the end of the week too," and he started doing that waving like a man with tennis elbow, from a balcony.

A spokesperson for the Italian army said "Us and the French have beautiful wives and girlfriends and mistresses. We can't be expected to kip out in the desert for years on end like the yanks and the British. Its easy for them as their women ... {cont P2-12}

I haven't laughed so much since they ate 'Mummy' the dog on 'Peep Show'!

hmm, nice one, let me just check the date.

Although it's difficult to determine whether some articles are or not.

had they been eating BBC spagetti

US to pull out of Libya air attacks

I didn't realise you didn't have a telly Geeks. More common than I'd have thought. Several couples i know, with young kids, no TV. Just laptops and DVDs.

Anon..should have worked a spaghetti tree in. Maybe next year.

What a mess. We are creating a stalemate.
The rebels are undisciplined, untrained, lack communications of all types. They have no heavy weapons,no proper leaders,no plan of attack,no armour, no artillery except rockets. They don't know when to advance, in what order,with which forces. or when to retreat, to fortify, or when to set ambush positions.
A 4x4 with an AAA HMG is still just a 4X4. In the desert war of WW2 British troops tried that, for lack of armour. AT guns mounted on trucks.
It produced a lot of burning trucks and not much else. British troops also tried to drive into the enemy quickly, to negate the AK's superior range.
Another heroic failure entered the history books alongside Balaclava.

I expect the US are hoping/praying/paying the Egyptians to go in.
The Egyptian army is more than capable of beating Libyan regulars.
On equipment alone they've got a modern 20 year advantage. With some US/Nato senior 'advisers' they'd be in Tripoli in a fortnight. Naturally they would park up outside and allow the rebels to do the city fighting where Gaddaffi's armour won't be much use.

A few weeks back I noted John Hempton's theory that it was all a cunning French plan. He reckoned that of all people, they had the best handle on what was what on the ground.

So for a day or three, conspiracy surged ahead in the race for a plausible explanation of what was happening. Now it looks more as if cock-up has regained its accustomed dominance.

I just got to this amazing site not long ago. I was actually captured with the piece of resources you have got here. Big thumbs up for making such wonderful blog page!
www.jobsearchdigest.biz |